Next week sees the return of The Great Escape, where we all get even less sleep than normal, and anywhere you could imagine a stage, and a few places you couldn’t, turn into venues for three days. It overshadows most other musical happenings in May, which is quite remarkable since May is also the month of Brighton Festival, so this post replaces our usual monthly gig preview. END_OF_DOCUMENT_TOKEN_TO_BE_REPLACED

October already. How time flies. We’re not quite as prompt as we would have liked with this month’s gig previews post – if we were we might have tipped the Platform B FM licence launch at the Green Door Store last night. Instead though we’ll kick off with a gig that’s been mentioned before tomorrow night.

Matters by Fröst came out last Friday and was named Resident’s album of the day . They’ve also made the launch gig their gig of the week too, so you don’t have to just take our word for it. It takes place at the Prince Albert, with support from Spill Gold.

There’s another album launch taking place next Wednesday too. The Haunt sees the return of 12 Stone Toddler and marks the release of their new album Idiolalia. END_OF_DOCUMENT_TOKEN_TO_BE_REPLACED

It’s the third of September, which means we’re overdue for our September gig preview post. 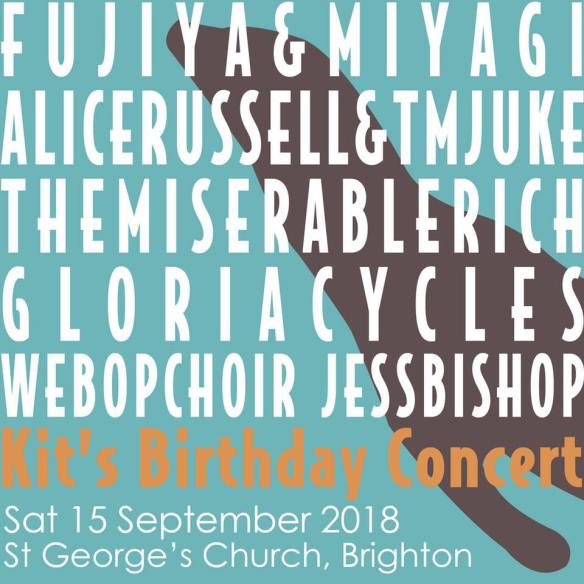 The big gig to mention this month though is Kitfest, taking place at St George’s Church on Saturday 15th September. It’s in aid of the Kit Tarka Foundation, a charity set up by The Miserable Rich lead singer James De Malplaquet following the sad early passing of his son at just thirteen days old. The Miserable Rich have been on hiatus for a few years but are reforming for the concert which sees Fujiya & Miyagi (playing their only Brighton gig of the year) and Alice Russell & TM Juke at the top of the bill for the evening, which will be MCed by David Shrigley. Gloria Cycles are also reforming for the night – newcomers to Brighton might know the name from the vintage sign in the Basketmakers, but Gloria Cycles was also the name of one of the city’s top bands around ten years ago – alongside Jess Bishop, We Bop Choir and 1BTN DJs. END_OF_DOCUMENT_TOKEN_TO_BE_REPLACED

Making end of year lists is tough, especially for us. No, hear us out – this isn’t just some sob story. Most of the bands we write about are just starting out, so haven’t had albums out yet – should they be lower down the list or even omitted because they haven’t put out a long player? And conversely what about the bands who have released an album – surely they shouldn’t be higher in the list by default. And what about the more established bands – should we be including them at the expense of smaller bands? And how are we going to get around the fact that bands with more recent release or live dates are nearer the front of our mind than those who put records out at the start of the year? It’s a metaphorical minefield, so our list is rather arbitrary. It could easily have been twice as long, and as usual we’ve gone for bands rather than tracks or albums to get around it. Here’s numbers 25 through to 11: END_OF_DOCUMENT_TOKEN_TO_BE_REPLACED

Here’s this week’s new music post, two weeks after our last one – we were out of the country last week though, so we’re playing catchup a bit now. Our first tune this week is from Brighton supergroup Alien Stadium, made up of Steve Mason and Primal Scream‘s Martin Duffy. Their first release is a track called This One’s for the Humans, a lolloping almost-baggy almost-bluesy number which is taken from a mini LP called Livin’ in Elizabethan Times which gets released on 1st December. Have a dig around for the version that’s up on Spotify which clocks in over six minutes long and gets a much more psychedelic groove on.
END_OF_DOCUMENT_TOKEN_TO_BE_REPLACED

Hello! We’ve got a whole load of new music to share this week, so I’m going to skip the preamble (which is normally the bit that takes the longest to write anyway) and jump straight in with Hello Hello – the new single from Fickle Friends: