‘Passengers Greatest Hits’. You might think this was a collection of songs by Mike Rosenberg but its title comes from the series of photographs of forlorn commuters which feature in the lyric book that accompanies this new CD by our occasional Brighton Music Blog contributor and photographer in his alternative moniker of Hiawatha Telephone Company. We spoke to Jon about what he thought he was up to.   BMB: How was this album made? JON: The whole thing was written in two parts – half of the songs in February 2013, the other half in February 2014 and then it was recorded a couple of days later pretty much in single takes by Martyn Lewis Moss (Butterfly House) in his Kemp Town attic on a Tascam cassette recorder. No computers or wizzardry involved. Then Martyn added some bass and keyboards, Maria Marzaioli (Slum of Legs, Reds) came along the following day and played some violin on some tracks she’d never heard before and there you have it. Wham bam, it’s an album, man! It sounds primitive. Do you wish you’d spent more time on it?

Probably. It’s a hard album to get into because there is no compromise with modern technology or much in the way of professionalism to be honest. But that also means it doesn’t sound like anything else. It won’t age because it already sounds old. We just wanted to get it down really quickly. And Martyn has this thing about never trying more than three takes of anything. If it isn’t working you should just move on, is his recording motto. In most cases we left it at just the one take. The flaws are so obvious that to get into the album you have to overlook them and treat it differently from the things you’d normally listen to. I think listening to it should feel more like a stroll around a small art gallery, rather than putting on a CD. Did it have any particular influences? I’ve always loved those old crackly blues and country recordings from the 1930s and so on [Ed: the first Hiawatha Telephone Company album was named after folklorist Harry Smith who specialised in collecting such 78s] and some of the songs take that approach. There’s the early primitive pop songs of Daniel Johnston, also recorded onto tape and those sound even more flaky than these do. And I was listening to a fair bit of Bill Callahan this winter, so some of these songs sounds a bit like Smog to me. But who knows? We’re just a mess of all the things we absorb over time, aren’t we? Tell us about the songs. I’m really proud of the opening song ‘If I didn’t love you’. I thought I was going to write a love song. Turned out it was a splitting up or a morbid death song. It was the first one we recorded and I told Martyn his piano should sound like the cold desolate Nordic sound of Sibelius, which it kind-of does. The shortest song is ‘keep it simple’ which started out as a bit of a joke that I wrote in 5 minutes playing around in the chord of D. It’s not really recorded right but we just left it and I think it’s cute. Oddly the next two shortest songs are the ones with the most words in them, both songs I’m really proud of. ‘Song about time’ has some great poetry in it, about needing to live life for the moment. Because you cannot battle time? Yep. The other one is ‘The Cost of Going To Work By Train’ which is an epic by my standards, full of words and stories. I intended it to be a bit of a mythical song, in the form of a traditional folk song, but one firmly rooted in modern lived experience. It’s clearly not about any one real person but it tries to represent the common man. At least I think it tries. There are some proper country songs in this collection aren’t there? Yes, two at least. ‘Ain’t no rainbow’ is a lovely song I think, soft, simple with the same four chords throughout but I like the clichés it uses which still manage to sound surprising to me. And I like how I just told Maria to play something sad and rural, and she came up with this wonderful violin line that’s totally infused with straw and cow-shit. And then there’s Woody’s Song, which I’m really proud of. It’s based on the New Year’s Rulin’s that Woody Guthrie wrote and I have as a poster in my kitchen but he never turned them into a song so far as I know. So I did. I think it could sound better of course, much as I love Maria’s beautiful country-fried violin. But I still hope someone else records it. I think it could be a big hit in Nashville!

Do you see all of these as songs other people might record? For sure. I think they’re good enough and ought to exist in other versions. They’re all pretty simple, but pretty little tunes. I ought to record other versions myself! What about Dave? A lot of people will think that’s about one person [our present Prime Minister].  That wasn’t really the intention, although I can see why people think it might be. It’s not how I see him – if anything it’s more about the sorts of people he probably thinks he’s against. It’s a song I really like playing live. It gets a reaction. It isn’t the only political song on the album by any means, although none of them are very obviously political I suppose. Do you have a favourite song?  I’m fond of Waking Up With You, more for the verses as I still don’t feel like I’ve finished the chorus. I might rewrite it, but I just wanted to record it for my wife. I didn’t really expect to include it in the album but it turned out OK so I did. And I really like the last song ‘I’ll never Leave you Baby’ which is another simple love song, but one with a twist. It’s a fun song to play live and I also really like Martyn’s bass line on it. A stupidly simple song, but it works. The CD’s only available in physical copy at the moment. Is that right? Yes it is. It’s a proper CD with a nice little printed photo-lyric book in a numbered edition, and it’s dead cheap. You can buy it or just listen on bandcamp, download a couple of tracks for free via Soundcloud or I’d send the mp3s (and the lyrics and chords) to anyone who asks nicely. I’ll probably make the thing available for download but only when most of the CDs have gone. Any plans for more recording? Well it took me five years to get around to recording my first album and another five years for this one. That said, I have plenty of other songs in a big book which never get played so maybe I should record some of them. So many songs, so little time. And we managed to go the whole interview without asking about your band name. Yep. Well done for that. Thanks. {smiles} ‘Passengers Greatest Hits’ is available now in a limited numbered 1st edition of 100 from the Hiawatha Telephone Company bandcamp site.

Tonight we’re off to see Momotaro supported by Faux Flux at Above Audio, but before we do, here’s this weekend’s gig picks: 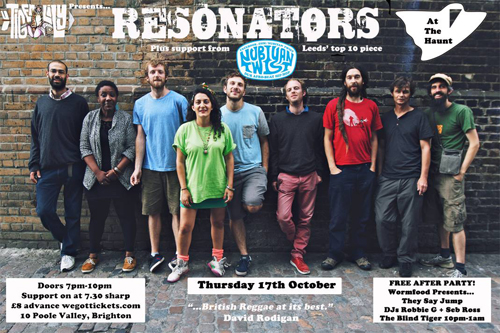 The big gig on Thursday night is Passenger. The Let Her Go singer is playing a sold out hometown gig at the Concorde 2 (actually he’s playing two, with the second next Monday, which is also sold out). Thursday’s other gigs which caught our eye were The Resonators playing at The Haunt, and Foreign Skin supporting Jungle at Sticky Mike’s.

On Friday night, Ancient Times launch their new single Nightschool at the Blind Tiger. Support comes from Shudder Pulps, Morning Smoke and Hot Glass. It’s also this week’s Brighton Rocks at Sticky Mike’s, with The Dials, Cat Fire Radio, 1914s and Broadbay on the line up.

Finally, on Saturday night, regular Green Door Store night Drugs returns after a summer break with a five band line up. For less than a pound a band, you get to see Grasshopper, Twin, Bentcousin, Skirts and The Bright Ones.