Nobody releases anything in December. Or so I thought. I figured that after putting up my end of year list I could come back in January to a relatively sleep start, but it seems that everybody else was thinking differently. So here’s what’s probably our biggest new music post ever, featuring some of Brighton’s heaviest hitters – Steve Mason has a new album has a new album out this week, and Blood Red Shoes’ new LP is due any week now

Hope you all had a good bank holiday. We spent it not blogging. Normal business is resumed, and here’s the last new music post for August.

There’s loads of new music this week, but before I get on with that, there’s been a couple of comments on social media after the new music posts from people pointing out that I haven’t featured their band. Neither of these acts had actually sent us any links or information, which makes things quite difficult – while we try to be proactive we aren’t omniscient and things do pass us by. The best way of getting in touch to get featured is to drop a mail to BrightonMusicBlog@gmail.com, with soundcloud / bandcamp / youtube links (or Spotify if you must, but as you’ll see below they don’t look great on blogs powered by WordPress), making sure you mention that you’re from Brighton if we don’t know you.

We’re only a few days away from June, so it’s about time for another set of previews. 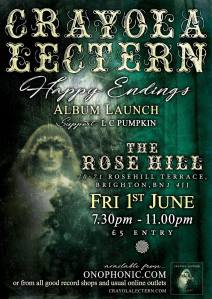 Our first tip is Crayola Lectern’s album launch at the Rosehill this Friday (1st June). Friday is also release day for Happy Endings, Crayola Lectern‘s second long player, and you can see the video for Rescue Mission in yesterday’s new music post.

Our next tip is another gig at the Rosehill, on Friday 8th June. Love Thy Neighbour and Immersion put on their fourth Nanocluster event, where Immersion and an invited guest play individual sets then join forces for the final section of the gig. Ulrich Schnauss joins them in June, following an incredible set from Laetita Sadier last month. END_OF_DOCUMENT_TOKEN_TO_BE_REPLACED

Orbital‘s comeback has been properly cemented – their comeback in February was technically a remix, so its good to have some proper new material from the Hartnoll brothers with their new single Copenhagen:

END_OF_DOCUMENT_TOKEN_TO_BE_REPLACED

January was a fairly quiet month for new music, so our second post of the year has taken until February. We’re going to start large, with one of the biggest bands from round these parts. Orbital are back with a track called Kinetic 2017, which is a remix of an Orbital side project release from 1992:

END_OF_DOCUMENT_TOKEN_TO_BE_REPLACED

It’s been a while since we’ve done a New Music post, so here’s a round up of some of the things we think you should be listening to.

Two thirds of Dream Wife are from Brighton, but their third member Rakel Mjöll is from Iceland. Brighton’s been home to Icelandic musicians before – Emiliana Torrini lived here for a number of years – but she never rocked out like this. Dream Wife’s new release EP01 is out now on Cannibal Hymns, and this is the title track Hey Heartbreaker. The band play a late night set at Sticky Mike’s on 1st April at the new-ish Busy Doing Nothing night.

END_OF_DOCUMENT_TOKEN_TO_BE_REPLACED

We wrote about loads of bands earlier this month in an arbitrary personal take on the year, but there’s been lots going on that we couldn’t include for one reason or the other. There were lots of bands who were just bubbling under, we didn’t write about any bands who were from Brighton – obviously – and we kept the list just to bands and didn’t mention venues or events or stuff like that.

We tried to have a bit of balance across our advent calendar, making sure we had big and small bands, so it was always going to be the case that there was going to be some we couldn’t fit in. As well as The Maccabees and Bat for Lashes hitting hard for Brighton, Blood Red Shoes and Orbital were troubling the charts. While we’re talking about big acts, Fatboy Slim‘s most recent Big Beach Boutique was a success not on the beach but at the Amex, where they apparently ran out of beer on the first night. On the subject of local bands in sports venues, hundreds of people braved the rain in July when Rizzle Kicks accompanied the entrance of the Olympic Torch to Hove Cricket Groung Saint Etienne were further down our longlist than the album “Words and Music by Saint Etienne” and their gig at the Concorde warranted, but with only Pete Wiggs living in Brighton, we had to prioritise bands with more local members.

Other bands with albums out in 2012 who we just couldn’t fit in were Tall Ships, Cave Painting, Ital Tek (referred to by one of my mates as possibly his album of the year), Sparrow and Negative Pegasus. When Todd Jordan isn’t being part of Negative Pegasus, he’s also one third of promoters One Inch Badge, who brought us the fantastic Sea Monsters festival at the Prince Albert as well as dozens of other great gigs, and is one of the people responsible for Bizarro World, a monthly covers gig which is so much better than it sounds on paper.

There’s a few bands who’ve caught our eye that we’re expecting big things from in 2013. Crayola Lectern‘s album is recorded and due to arrive in Spring sometime on Bleeding Hearts Recordings. We saw Dead Cars live a few weeks ago and really really liked what they were doing, but it was too late to squeeze them into our list. But if we were to be pushed to name one act whose year it could be then we’d have to say Anneka. We’ve only seen her live once so far (supporting Com Truise at The Haunt), but there was something about what she was doing that sounded so fully formed, that she’s bound to be huge.

Outside of Brighton, here’s our top ten albums and top five tracks of the year: