This is actually last week’s new music post, which was all prepared, but for some reason I never hit “publish” on. So, a few days late, here’s some new music for you:

It’s almost the end of January so, after a break over the Christmas and New Year period, here’s our first gig preview post of 2020. 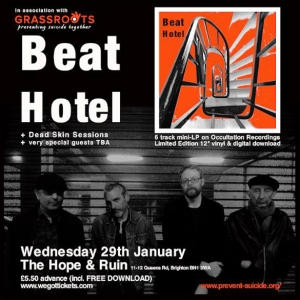 We’re actually going to kick off with a gig at the end of January, which we would have included in a January post had we made one. Beat Hotel have a new six track mini LP out this week, and are launching it at the Hope & Ruin on Wednesday 29th. Tickets are £5.50 in advance, and proceeds are going to the Grassroots Suicide Prevention charity.

Anyway, onto gigs actually in February. On Saturday the first, Dog in the Snow plays at Green Door Store with support from Polymers and The Daylight, as well as a DJ set from LibraLibra (who have just remixed the new Dog in the Snow single Monochrome).

Over the last year or so, Animal House having been putting out quite a few release, all of which has culminated in their new album Premium Mediocre, which they’re launching at Patterns on Friday 7th February. Then on the following night (Saturday 8th) the fantastic Guru are playing a sold out gig at the Prince Albert.

If you haven’t yet experienced Nancy’s leftfield noise-pop, then Wednesday 19th February could be a good chance to get acquainted when they play the Prince Albert. Support comes from Deep Tan and EllisD. 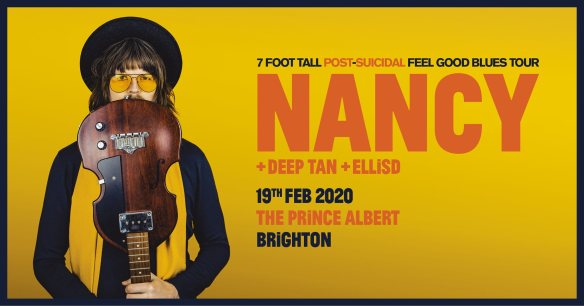 Last but not least, there are a couple of single launches that we’ve spotted too – Lime launch their debut single Surf’n’Turf with a gig at the Rossi Bar on Thursday 20th February, and M Butterfly host a gig for their upcoming physical release at the Black Dove on Saturday 29th February with support from Such Small Hands.

It’s Christmas Eve Eve, and we’ve left it a bit late to come up with our end of the year round up. Without much further ado, here it is – We say it every year, but this isn’t an ordered list, because you just can’t compare a band who’ve been releasing records for over twenty years with another who’ve just put out their first release. So hopefully there’s something in here for everyone, whether you’ve been listening to Nick Cave since he played with The Birthday Party, or you discovered CLT DRP at a sweaty night at the Green Door Store:

Here’s this week’s new music, coming on a Saturday rather than midweek, so we’ve caught all the tracks that just dropped yesterday too, including tunes from the new albums by previous Brighton Rocks subjects Dog in the Snow and Animal House (and a new video from BUNKR too). Anyway, onto the music:

It’s the fourth of November and we haven’t got around to this month’s gig preview post yet. That means we’ve missed out on telling you about Tru Thoughts 20th Birthday Party which was at Patterns on Saturday, and British Sea Power’s all dayer at the Concorde yesterday. There’s still a lot of other gigs to tell you about though, including a couple in December – The music world shuts down towards the end of November and only posts end of year lists, so I’m including them now so they don’t get missed.

Anyway, first gig to mention is Projector, who are playing at the Green Door Store this Thursday following the release of their latest single Superstar a few weeks back. Support comes from Gaygirl, Zooni and The Golden Age of TV.

Then on Friday night Yonaka kick off their tour with a hometown gig at the Concorde 2. It’s sold out, so well done if you’ve got tickets.

Blood Red Shoes are fresh from supporting the Pixies on their tour, so are bound to be on top form when they play at Chalk on Thursday 14th November. They’ve got a new live four piece set up so they’ll be sounding bigger than ever.

We always try and make sure we mention when Brighton bands play an instore at Resident, and this month it’s the turn of BMB favourites Dog in the Snow, who play on 15th November in support of their new album Vanishing Lands which comes out on the same day on Bella Union. This will be your only chance to them live around the time of release (as far as we can see), so don’t pass this up.

On 21st November Lazybones play a gig at Latest, which we’re pleased to see hosting more shows again these days. They’re out on the road currently promoting their new single Trash Talk which is out now. 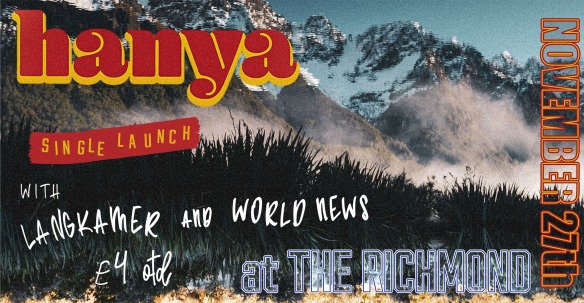 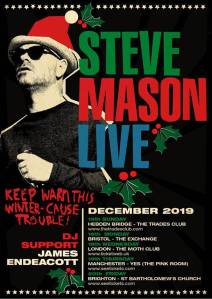 On now to the December gigs that we mentioned earlier. We couldn’t not mention Penelope Isles – one of the nicest and hardest working bands in town. Not that they’ve been in town much in 2019, having spent every waking hour off on tour. But their touring comes to a close on 11th December, when they headline Chalk. If it’s not sold out yet it will be, and don’t say that we didn’t warn you. Support comes from Ciel, and Innerstrings will be on visuals duty.

Last but by no means least Steve Mason plays a Christmas show at St Barts on Friday 20th December – They’ve even photoshopped a santa hat onto his picture. If he doesn’t play any Christmas tunes that probably means you can ask for your money back. Maybe.

Hello! Here’s this week’s new music post, which kicks off by the surprise new single from Fickle Friends. Tucked in at the bottom below the spotify playlist is also the new video from Dog in the Snow taken from their forthcoming album Vanishing Lands:
END_OF_DOCUMENT_TOKEN_TO_BE_REPLACED

Here’s this week’s new music post. It was almost ready to go yesterday, but then we spotted that there was a midweek release from Projector, so we held out for a day to include that. END_OF_DOCUMENT_TOKEN_TO_BE_REPLACED