Next Monday sees the release of Cousin’s Alternate Tunings for Regular People EP, coming out on Fcking The Night on hand finished fabric sleeved 12″ and download. Cousin’s instrumental math-rock is a lot more accessible and melodic than a lot of other bands in the genre, but that doesn’t come at the expense of big rock hooks. Here’s the video for for the song three on the six track release, Fourth Floor Balcony Fight:

The EP is being launched at the band’s gig at Fitzherberts tonight, where they play alongside Nature Channel, Mystrys and Daskinsey4.

The full tracklisting is as follows:

Tucked in at the end of this week’s gigs picks was an artist who we hadn’t written about before on the blog. Champione are playing a late gig at Sticky Mike’s to support the launch of their new EP which came out yesterday.

The Home EP features an incredibly generous eight tracks of Electro House. Opener MshMshMsh has a fizzy, effervescent introduction, before bubbling into a French House banger. The next couple of tracks, Unicorns and Bear vs Bear, follow suit with a ravey electro house that would sit nicely alongside MSTRKRFTS finest. The View brings female vocals into the equation, sounding a bit like Katy B produced by Justice. Things go a bit dubstep on title track Home, which features vocals by Danny McGurn, and The End uses elements from each of the preceding five tracks to make something new. The EP also has two remixes of The View by Burenze and Dirty Purity.

Home is available through iTunes and Champione’s Bandcamp page, and the launch night is at Sticky Mike’s from 11pm-3am on Saturday night.

It’s that time of week again where wish dish out our recommendations for the best Brighton bands playing around town this weekend. You might not be at Glastonbury, but that’s no reason to miss out on live music. 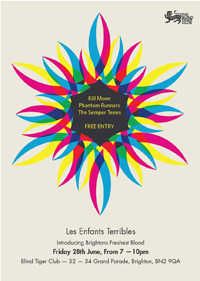 There’s loads of good stuff on Saturday too, starting in the afternoon. There’s a twelve hour surf rock all dayer on at the Green Door store, kicking off at 4pm and going on until 4am, with The Space Agency playing at some point, as well as loads of DJs and a few other bands from out of town. It’s also The Open House Pub’s Cider Festival, which has Jennifer Left and Jacko Hooper playing live. Finally Champione have their EP launch at a late night gig at Sticky Mike’s from 11pm.

We got a sense of déjà vu last night. It felt like it had only been a week since we saw the White brothers onstage at the Green Door Store. Last night’s songs weren’t from Idiots though. In fact, it wasn’t even an Electric Soft Parade gig. Confused yet?

Last night Alex White’s new band Interlocutor played at the Green Door Store. You can count their gigs so far on one hand, which is why you might not be familiar with the name. Including Alex’s brother Thomas (on drums) there were a total of eleven people on stage, including a violinist, a three piece horn section, an additional percussionist, and at times three people playing guitar.

If all of this sounds a little bit grander than the current Electric Soft Parade live setup, which has less than half the number of musicians, then that’s because it is. While both Idiots and the new Interlocutor material both hark back to the days of classic songwriting, Interlocutor’s influences are more rooted in AOR – The set included Steely Dan and Todd Rundgren covers, the arrangements were bigger and the sound a little more melancholy. Alex’s own songs, which he described at one point as “slowcore” sat well alongside the covers although the lyrical content about family and domesticity brought things a little closer to home.

Interlocutor may not have packed the pop punch of Electric Soft Parade, but what they did had grace, class and the same fantastic musicianship.

It’s barely been a few days since we last posted about the latest batch of new music but here we are again with even more!

First is the new video from British Sea Power for their upcoming single Loving Animals. It’s hot off the press only going up YouTube earlier today:

Next up is Derriere‘s new single Last Laugh. We gave this a share on our new Facebook page last week, but if you haven’t found us on Facebook yet you might not have seen this. Last Laugh will be out in July:

We’ve had some indie, some soul, and now we’ve got some leftfield electronic pop. Come Alive is the title track from Faux Flux‘s new EP which is out on 1st July:

Finishing us off with something different again is the latest release from the Wilkommen stable. Eyes & No Eyes release their new double A side If No One Else Saw It / Flying Machine today, available on 7″ vinyl, cd with handmade linocut cover or name-your-price download:

We’ve been keeping our ears to the ground for new music coming out of our fantastic (if a little litter strewn) city, and here’s what we’ve heard recently.

First up is Gaps whose new video Keep You appeared online today. Keep You is appearing on a double on a double A side single with Cascade (which you can currently hear on the band’s Soundcloud page) on Sexbeat Records on 15th July. Keep You sits somewhere between Folktronica and Dream Pop, and we like it a lot.

Dead Captain‘s debut EP is out next week. We don’t know a great deal about it, other than it’s going to consist of five tracks, and that the video for lead track Maybe Maybe came out yesterday. Take a look here:

There’s big news from the Tiny Dragons camp – their tune Canvas has been remixed by Pact and picked up by Kitsune for their latest mix cd. Kitsuné Soleil Mix 2 is out July 1st and sees Tiny Dragons alongside the likes of Hot Chip and Two Door Cinema Club!

Fragile Creatures eponymous new single Fragile Creatures was posted up to listen to on Soundcloud earlier today. It’s another catchy pop tune from the band, who also recently announced that they’re be curating a series of gigs at the Blind Tiger later this year.

Finally, we’ve got the video for Pure & Apart by Tyrannosaurus Dead, the lead track from their forthcoming EP Pure // Apart due out soon on Odd Box records. We first gave a preview of Sadie which is also on the EP back in January, so we’re pleased that the rest of the tunes finally seeing the light of day.

Here’s our gig picks for this weekend coming up. We’ll keep things short and sweet this week since this isn’t the only post we’ll be putting up tonight.

On Friday night The Resonators headline the Blind Tiger. If dub isn’t your thing then Flash Bang Band are playing for free at Northern Lights. There’s also a Brighton Rocks night at Sticky Mikes, with The Victorian Hunter, The Evil Son and the Frank Melena Band. 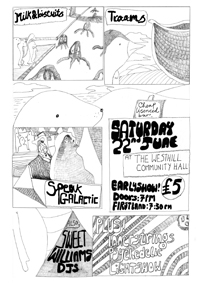 Saturday night sees Milk & Biscuits playing a Glastonbury warm up gig at the West Hill Community Centre alongside Traams and Speak Galactic with lighting from Innerstrings Light Show. Unusually, it’s not a BYOB gig and there’ll be a bar. Meanwhile all weekend at The Gladstone it’s their Gladstonebury festival

Support came from the leftfield Crayola Lectern, who we’ve written about numerous times. The stage was all set up for the headliners, which left Chris Anderson tucked at the back playing Electric Soft Parade’s keyboards and Alistair Strachan rather exposed at the front. They only played a short set, and did their usual trick of leaving those in the room who hadn’t seen them before confused and beguiled.

By the time The Electric Soft Parade were ready to start the room was as rammed as the stage. Now playing as a six piece, and with at least half the band swapping instruments over the course of night there it all got a bit crowded. The set was drawn from their whole career with around half the tunes taken from Idiots. It was their first live gig with the new material, not that you would have known it. The White brothers were on charming form, with plenty of banter including some self deprecating words on their review from NME (which referred to one track as ” as unlistenable as a million malfunctioning taps” – “How did they know that was what we were after?” quipped Alex!). The band finished up with an encore of album closer Never Again played just by Alex and Thomas and then Mr Mitchell with the whole band. Electric Soft Parade – it’s good to have you back.

The Electric Soft Parade are back onstage in Brighton again on 4th July, at an instore in Resident, and again on 19th July supporting The Levellers at The Dome.

Last Night’s Source New Music at the Dome Studio Theatre was a fantastic night. We’ve written about all three bands, but I can confidently say that each of the three bands better than I’d ever seen them before.

Jacko Hooper is growing with every performance, and he won over the room most of whom were there solely for Martin Rossiter. There seems to be less nerves than when I first saw him, and there’s a great balance that shows off the quality of both his songwriting and his guitar playing. The Beautiful Word have made a bit of a change of direction this year, going a bit more indie and introducing tropical guitar riffs. There’s still a hint of the twee folk in the background with tracks like May Not Be Love, but overall they now sound like a band who’ve found their sound. Fantastic stuff.

The first thing Martin Rossiter did when he came on stage was thank The Source for extending their definition of New Music – I first saw Gene at Reading Festival back in 1999 – but Martin’s solo album only came out last year. Being the showman that he is, he’s recruited the talents of pianist Robin Coward so that he’s not constrained by an instrument, which allows Martin to roam the stage. The simplicity of the songs holds up in a live setting, and the sound is every bit as powerful as on the record. If you’re thinking of going to see Martin live at Bush Hall in London next week, then we thoroughly recommend it. 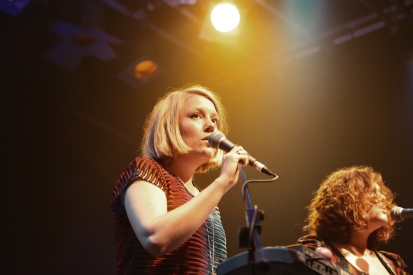 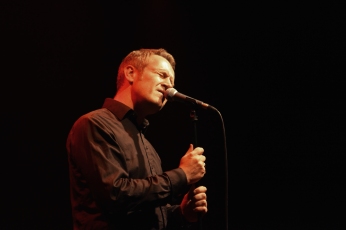 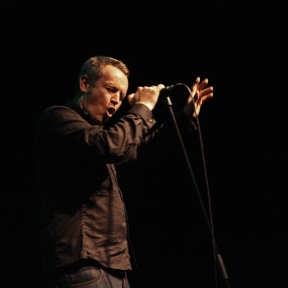 Back in February we wrote about a new release by Emiliana Torrini, put out on a 7″ only label called Speedy Wunderland. They’re obviously doing something right over there because they’ve given us cause to write about them again.

Their new release is a track called The Bride, a collaboration between Natasha Khan and Toy. We’re not quite sure what distinguishes Bat For Lashes from Natasha Khan, but the piano line, and the vocals are instantly recognisable. You can take a listen to the track on soundcloud below, and the record is available to pre-order from Resident. 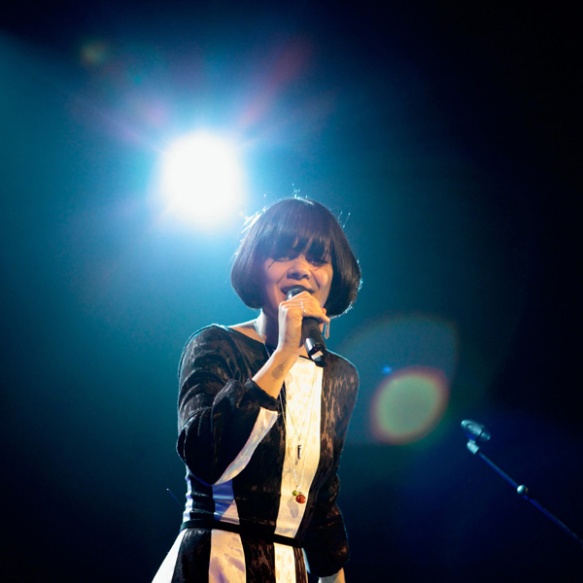