It’s been a while since we’ve done a New Music post, so here’s a round up of some of the things we think you should be listening to.

Two thirds of Dream Wife are from Brighton, but their third member Rakel Mjöll is from Iceland. Brighton’s been home to Icelandic musicians before – Emiliana Torrini lived here for a number of years – but she never rocked out like this. Dream Wife’s new release EP01 is out now on Cannibal Hymns, and this is the title track Hey Heartbreaker. The band play a late night set at Sticky Mike’s on 1st April at the new-ish Busy Doing Nothing night.

END_OF_DOCUMENT_TOKEN_TO_BE_REPLACED

Here’s the pick of our favourite tracks we’ve been listening to this month, just in case you missed them first time around

OK, so maybe we’re a bit biased here because Bentcousin gave us our first exclusive track that we’ve posted on the blog, but nevertheless it’s still a great catchy tune

Dog in the Snow’s latest single is a more electronic affair than their earlier work, and their best yet in our opinion.

The NME have just caught onto the New Union’s new single Now. We first posted about it back in February.

IYES ascendancy continues apace with their new single Breathe which ropes in production dues from MNEK.

Another Brighton band who’ve roped in a name producer are Phantom Runners, whose new single has the guiding hand of the Fun Lovin Criminals’ Huey Morgan.

The original of Fall was a more guitar based post rock affair, but in it’s remixed form is much more blissed out.

Over the course of March, A Lily put out an EP of four cover versions called Augury. Their version of Love’s A House is not a Motel is our pick.

Eagles for Hands latest soundcloud upload is a collaboration with Sivu, which shows a completely different side to both artists work.

The new video from Black Rooster Black Shag is another teaser for the band’s debut album which gets released on 1st May, which we’ll be telling you more about very soon.

Hylia is the track with the strongest Eastern flavour from Hypnotized’s new Telesto EP, marrying sitars with rolling beats.

Here’s this week’s roundup of the new music that we’ve heard.

First up is a new track from Eagles for Hands featuring Sivu. Farewell Appalachia isn’t Eagles for Hands normal fare, being vocal and more more song-like, with his trademark electronica being used to subtle effect.

Next is the latest upload from A Lily. We mentioned last week that throughout March they’re putting up a track every week. This week they’ve covered Love’s A House is Not a Motel.

Them The Sky put out a remix of their track Fall which featured on last year’s Echolalia EP. London’s Finjin is on remix duties here, chopping up the vocals and underpinning things with lovely burbling electronica.

Finally we have a track by Rooster Cole – formerly known as the front man of Black Black Hills, something you’ll spot as soon as the vocals kick in, although The Waiting Place is a bit less rock’n’roll and a bit more dramatic, with few less guitars and a broader palate of strings and piano.

We’ve got a bumper New Music post for you today. I went to go and write it mid-week but Soundcloud was down and since then there’s been more tunes to write about.

First up is Michael A Grammar whose Random Vision EP is out on January 27th. We’ve previously featured another track on the EP (The Day I Come Alive, back in November), and now another track Suzanna is out there.

Next up is Them The Sky who have put up another track from their Echolalia EP. This is called Start Again:

Brighton Music Blog favourites Bentcousin have another new song up on Soundcloud. The Love Song recalls 60s Motown beats and has plenty of references in the lyrics too:

Changing tack completely, we’ve got the new folk rock single from Stark. Let’s Fall Down Together is out now and the band are playing at the Prince Albert on 4th March.

All out pop doesn’t seem to feature much on these pages, but Salt Ashes is here to change all that – her new single Somebody could easily be a Kylie single:

As if we hadn’t covered enough genres yet, here’s some lovely ambient electronica. Somni has put up a couple of tracks on bandcamp, in advance of an album due in February. Here’s Glacier:

Finally we have Unknown Brothers, who have put up their Unkown Brothers EP onto bandcamp. Physical copies are coming next month but until then, you can pick up the EP digitally here:

For this week’s gig picks, we’ve got tie-ins with two different festivals and some local media big hitters putting on gigs, as well as a few other odds and sods.

You may have heard that Brighton Digital Festival is on in town at the moment and as part of that Pop Up Brighton return with their Sound Screen event, bringing together local bands with international visual artists. On Thursday night at the Corn Exchange Phoria, Luo and The Hundredth Anniversary play to a backdrop of visual collaborations that the bands and video artists have been working together on for the last six weeks. Meanwhile Time for T headline at the Hope for Brightonsfinest, with Gypsy Switch, Paper Hawk and Prisoners Cinema also playing, and Monsters Build Mean Robots and Spacenoid are on the bill at Brighton Noise / Nice Weather For Airstrike’s Industroika gig at the Prince Albert.

Saturday night is the third of The Haunt and Juice Brighton’s short run of weekly gigs. This week they have Them The Sky, Garden Heart, and Paper Hawk on the line up. It’s also the first of this month’s two Source New Music Nights (they’re hosting another on 20th as part of Brighton Digital Festival). This one is curated by Wildwood Promotions and is headlined by Alex White’s Interlocutor, with Red River Dialect, Octopuses and Herb Denton’s Last Dime playing too. Finally, it’s the Over The Moon Festival’s pre-party at the Blind Tiger, with a line up that includes Eagles for Hands, Mitch Wade Cole, Platypi, Eone and Murder He Wrote.

This is our second post of new music this week. Maybe bands are getting their music out their in festival season, or maybe it’s a coincidence, but you certainly won’t hear us complaining about more music.

The Seed is the new album from Eliza Jaye. Australian born Eliza’s debut album starts off a bit folk rock (with violin added by her sister Anna, who’s contributed to records by the likes of Bat for Lashes and Brakes), but quickly you come to realise that anything goes, as long as it’s rock. The album is out on 26th July, with a launch party on the day at the Ranelgh. Here’s the video for her latest single Marmalade:

A few weeks ago we mentioned that the Pact remix of Canvas by Tiny Dragons would be appearing on a new mix released by Kitsune records. The track also appears as part of the band’s new Come Alive EP, available as a six song download on iTunes, or on 7″ through the band’s online shop. Here’s the video for the lead track:

The Meow Meows‘ album Somehow We Met comes out a week on Monday (29th July). Their launch party is this friday, at the Gladstone. Here’s the video for the first single from the album, Siberian Soup, in honour of Pussy Riot:

Them The Sky have put up a video for Echolalia – one of the tracks from their forthcoming EP . Their only show of the summer is going to be at Latest Music Bar next week on the 24th, so if you like the sound of this, get down there:

Black Rooster Black Shag are a brand new band who are making their live debut at Sticky Mike’s Frog Bar on 27th July. Their debut album As Far As My Lead Will Take Me is out this autumn, preceded by the single Amsterdam, which is out now:

Boing is the single from Amongst The Pigeons, and came out on 15th July. The song is more of their Orbital inspired dance music, and the video was filmed on the pier:

So, we’ve got a veritable bonanza of weekend gigs for you this week. Last week I was musing that maybe things that might get a bit quieter in the run up to Christmas – how wrong I was.

Let’s start this with Thursday – it is the start of the weekend after all. We’ll be heading down to the Concorde 2 to see Saint Etienne (with support from Scritti Politti – what a line up, eh?). Also on thursday night there’s Mr B‘s Chap Hop Christmas Ball at the Prince Albert. Holy Vessels play their album launch at the Blind Tiger, with support from Soccer96, Autumn Red, The Common Tongues and Songs For Walter. Last Orders at the Marshall Arms is out now and available from iTunes. Paul Diello plays his annual Christmas party at  the Brunswick, and Alice Amelia plays the Constant Service. 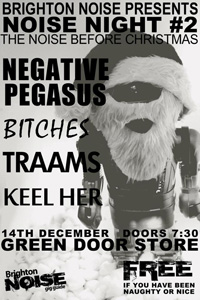 On Friday British Sea Power return with a special Christmas Krankenhaus at The Haunt. Our friends over at Brighton Noise are putting on their second night at the Green Door Store. They were turning people away from first one, so get their early to see Traams, Bitches and the fantastic Negative Pegasus. Transformer are launching their single Dragonfly at the Blind Tiger. Check out the Facebook event for more details and a look at the video. The last gig on our radar on friday is at the Coach House in Kemptown (not the pub on Middle Street), where Crayola Lectern headlines a “veritable melange of auditory delights”. 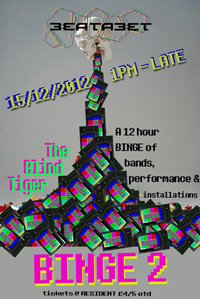 On Saturday The Impellers hold their Office Christmas Party at The Brunswick, which is cheap to get into if you’ve got a ticket for Craig Charles later that night. If you’d like to start things a bit earlier on in the day, Beatabet kick things off at 1pm. They’ve got twelve bands playing at their Betabet Binge – P for Persia, Spacenoid, Napoleon III, Colectress, Speak Galactic, Laboratoro, Old Man Diode, Scalar Fields, Duot, Operator, Temple Decade and Burnt Toast. Phew!

If you’ve still got any energy left come Sunday, then our top pick is Cate Ferris at The Neptune. There’s also an art event at the Blind Tiger called Wonderland, where Amongst The Pigeons, Them The Sky, Tiny Dragons, and the Elevators and Ribbon play in the evening. In yet another night in town with an above average number of bands on the bill, there’s also Club Criminal at Sticky Mike’s, starting from 5pm, with Trip to Dover, The Flip Flays, The Kut, Thieves by the Code, The Trophy Hearts, Childbrain and King Mews.