This week, Phantom Runners head out on an eleven date tour of the UK. They kicked things off at the weekend with a low key date in Worthing and are heading to The Hope & Ruin tonight. There’s another local date the weekend after next at Sticky Mikes before they properly head out on the road taking in London, Bournemouth, Southampton, Hastings and Dartford (as well as another Brighton date at Bleach on 26th November).

The band are rejuvenated having had a bit of a line up change recently, and support at tonight’s gig comes from Curxes, who we haven’t caught since their appearance at The Great Escape six months ago, so we’re looking forward to tonight.

Anushka are back with a new single and tour. Atom Bombs is being released on Gilles Peterson’s Brownswood Records on October 13th and comes with a dub mix and a some remixes, including the NameBrand Sound remix featured here. To support the release the duo are out on tour, playing at Audio on thursday night (2nd October). 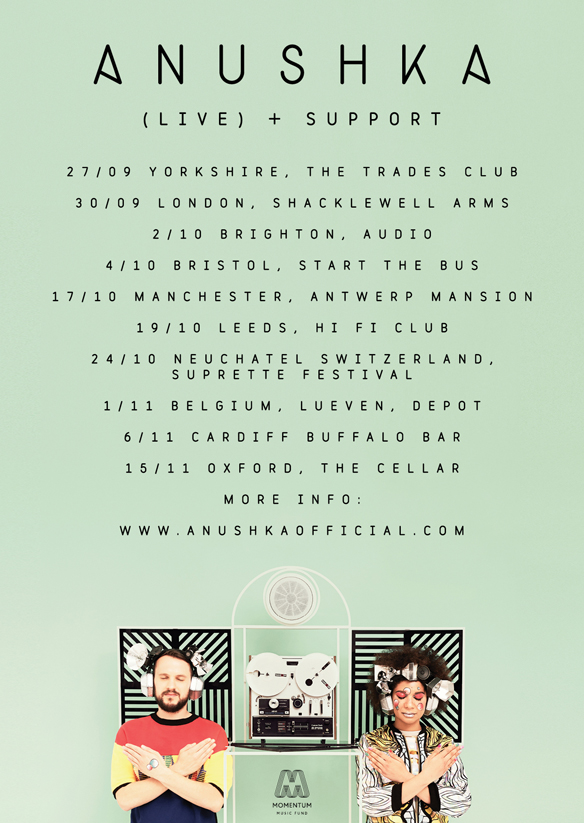 Fresh from spending most of this year touring with Pains of being Pure at Heart, Fear of Men today announced their first headline tour of the UK. It doesn’t kick off until September because the band already have their summer filled up with festival dates, and the first night of the tour is a hometown gig at The Hope – which I’m sure the band could sell out many times over, so get in early buying a ticket. The full list of tour dates is:

Shortly after I posted about the free download of Songbird in one of our New Music roundups a few weeks ago, the Moulettes camp got in touch to point out that they weren’t giving out the download to celebrate the end of the promotion of The Bear’s Revenge, but to celebrate the start of the last leg of the touring of it, before they get their heads down to finish work on Constellations, their third album due for release in spring of next year. Sadly their’s no Brighton date on the tour – the band played at Middle Farm’s Applefest in October – but London’s not that far away, is it?

Since then the band have announced that they aren’t just giving away Songbird as a free download but a whole six track mix tape, entitled Farewell To The Bear, featuring three tracks from The Bear’s revenge as well as a b-side, a remix and a live track. Assault is one of the best things they’ve ever done and is utterly breathtaking live, so it’s good to see it having more of a life than just being a b-side.

Kins eponymous album has been out since July, but until now there hasn’t been a single released from it. All this changes when they release Aimless on 18th November. The band are heading out on a national tour starting later this week culminating in a hometown gig at The Hope on the 21st of November.

update : we’ve just seen that there’s a video for Aimless up on the Vice website, but it’s not one that we can embed into the blog for now. 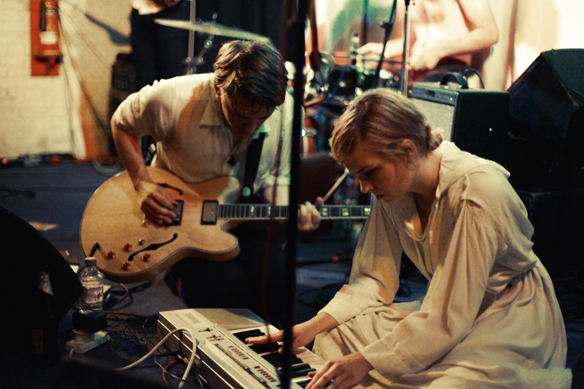 Today Esben & The Witch announced a tour with Thought Forms and Teeth this autumn, taking in London, Leeds, Liverpool, Leicester and three other places not beginning with L, including their hometown – they play Sticky Mike’s on 13th October.

Alongside the tour announcement the band have also put out a video to Iceland Spar, which is the first track on Wash The Sins Not Only The Face. It was all filmed on Super 8 while they were on tour earlier this year. The band say “We see the song itself as the rallying cry at the start of an expedition so setting it to the images of our trip seemed wholly appropriate”

For a Brighton band* Fear of Men don’t play that much in Brighton. So far this year, they’ve played as part of the Sea Monsters mini-festival, and also played a set during The Great Escape, so their support set for Best Coast is the first opportunity of 2012 to see them on a decent sized stage. The band have been supporting Best Coast for most of their UK tour, which is a bit of a coup for a band with only a clutch of singles to their name so far, and the homecoming gig is also the final date of the tour.

It was an early gig anyway, because of a club night later on at Coalition, and Fear of Men’s set started at a ridiculously early 7.15pm, but by then the venue was already getting busy. For about half an hour, they filled a few seafront arches with their melodic guitar pop – catchy, tuneful melodies with fuzzy guitar around the edges, owing as much of a debt to Sarah Records releases of the late eighties as it does to the wave of female fronted indie bands of the nineties – songs that might not fill stadiums, but that you’ll form much more of an emotional attachment to. It’s a similar trick to that played by Pains of Being Pure at Heart – the familiarity of alternative music from the past but pulled off with a modern style that they make their own. In no time at all, the band are closing their set with new single Green Sea. I reckon it’s about time they came back and played a headline set.

Jess Weiss of Fear of Men

Later on, Spectrals from Leeds plays for a bit (sad songs, because they were one man down, apparently), and then Best Coast headlined. They started nervously with the lead track from their new album The Only Place, but quickly hit their stride rattling through their back catalogue, finishing up with Spectrals joining them onstage for their last track – a tradition which apparently started last time both bands played in Brighton. A great night!

*well, partly Brighton – some of them are Londoners, but they’re that good that we’ll keep them for ourselves.

Back in April The Moulettes had their single launch at The Marlborough. Two months on, it’s about time they actually released it. Held back by a combination of trying to tie things in with their multitude of festival appearances, and pressing plant delays caused by bank holidays, Sing Unto Me finally hits the shops next monday.

Sing Unto Me is the lead single from the Moulettes new album The Bear’s Revenge. In a bit of a departure from most of their tracks, lead singer Hannah Miller takes on guitar rather than ‘cello duties, but the overall sound is very familiar – tight female harmonies sung in the round, and a folk rhythm section made up of guitar, fiddle, bodhran, and any other bits of percussion that come to hand as well as double bass from Ted Dwane from Mumford and Sons.

Being the generous sorts they are, the single comes with a bumper six tracks – as well as a single edit, there’s a remix, a cover by fellow Brightonians The Muel, and a handful of b-sides including live favourite Are You Going Away To Sea, which is probably the track that made me fall in love with them in the first place.

The band are going to have a very busy summer. If you happen to be at any of the following festivals, I heartily recommend you go and see them:

Fresh from headlining last monday at One Inch Badge’s Sea Monsters festival at the Prince Albert, The Sons of Noel and Adrian have announced a tour:

They’re touring to promote their next album Knots, which should be out later this year, which we will no doubt be writing more about when it comes out.

As you may have seen on Facebook or Twitter recently, there’s a lot of buzz around the upcoming Graham Coxon tour, where he’s offering local bands the opportunity to be the support act. The Brighton gig is on 23rd April at the Concorde 2. If you click through to here, you can see the bands who have been nominated so far. I say that – all you get is how many “suggestions” (which I guess is how may times it’s been tweeted of facebook’ed about) a band has had so far. You don’t get any of the important information, like, say, the band name unless you start a video, then click into the video to bring up the information about it, which is a bit poor in my opinion. It looks like a few bands have got strong campaigns going already, but if your favourite band doesn’t have the most votes, don’t worry, because the final decision is down to Graham Coxon.