So, that’s bonfire night and Halloween over and done with for another year. What’s there to brighten your lives up? All these tracks, that’s what: 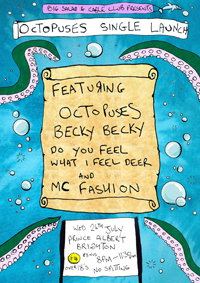 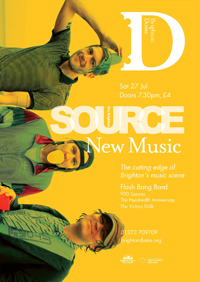 Normally most of our gig previews are posted up a couple of days before the weekend they occur, giving you all a few day’s notice of what’s coming up. Occasionally, if something catches our eye we might make an exception and point it out a bit earlier, and that’s just what we’re doing here.

On Saturday 27th July, The Hollow Tree Fundraiser takes place at Saint Luke’s Church, in aid of the RSPB. Three local acts are playing – The wonderful Mary Hampton, anti-folk heroes 21 Crows, and Brighton Music Blog favourites Do You Feel What I Feel Deer?. There also promises to be a raffle, giant games, and the opportunity to build a habitat on your head. There’s more information on Facebook.

This also gives us the opportunity to post up the video for the Mary Hampton Cotillion’s latest release Gold Hat, which appeared online last week:

Well this is an oddity. A new track out of nowhere from Mary Hampton and her gang of players, the Cotillion. Mary is always a treasure, so anything new from her is worth paying attention to.

But this is a strange, dramatic and sometimes haunting, sometimes disturbing musical setting for the epigraph from the opening of F. Scott Fitzgerald’s novel ‘The Great Gatsby’. The lyrics are sung passionately from the dark inards of the singer, whilst the music swirls around in careless abandon in some parts and a cool dispassionate plinkety plonk of Mary’s piano in others.

The words (which are Fitzgerald’s, not Mary’s) in some ways summarise the novel and are worth repeating just for the hell of it

Then wear the gold hat, if that will move her;
If you can bounce high, bounce for her too,
Till she cry “Lover, gold-hatted, high-bouncing lover,
I must have you!”

Is this track in some way related to the forthcoming film of the Great Gatsby? I don’t think so. Was it prompted by it? Hard to tell. Is it trying to cash-in on the movie? I doubt it very much. Is it a precursor to more Mary Hampton music? We hope so, although it left me wanting more tunes and more songs.

So what do you think of it? Do tell.

This is my third visit to the Hanover Community Centre this year. Last time I was there was a few weeks ago for the Hanover Beer Festival, and back in the summer I was there for a non-Christian christening type affair. It’s not your usual live music venue. That didn’t put people off though, with the room full to the brim before anyone had even played a note.

First up were Do You Feel What I Feel Deer, a folk duo augmented with violin, a smaller arrangement than when I saw them supporting Mice Parade a couple of weeks ago. Their tight harmonies held the room, and the song themselves felt at the same time both progressive yet timeless. The audience was spellbound, as was I.

The second support was Crayola Lectern, whose album The Fall and Rise of Crayola Lectern is due early next year. Crayola Lectern don’t write normal songs – their tracks don’t follow a verse / chorus / verse structure, and can sometimes stretch for ten minutes as different turns are taken. There’s humour, but they aren’t a novelty act, and some songs convey an astonishing level of tenderness and emotion just with the music. There aren’t really words that can truly describe Crayola Lectern. They’re completely without comparison ; brave and individual, and while they confused some of the audience, they should be applauded for doing their own thing. 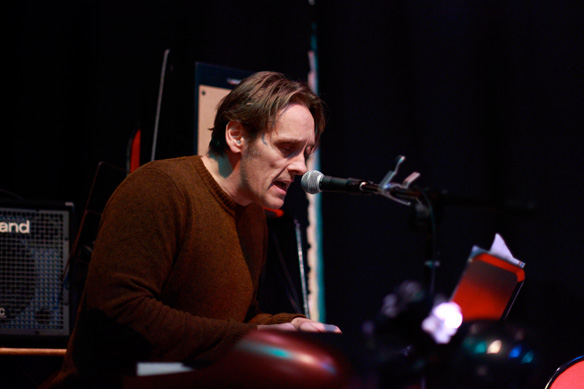 Finally it was time for Mary Hampton Cotillion. She could call the additional musicians that joined her her band, but they felt a bit more special than that. Seeing Mary Hampton live is an amazing experience normally, but with a band she takes things to another level, bringing in rich harmonies and lush arrangements. Their set felt like it was over too soon, taking in around half a dozen folk songs which sounded like they could have been written at any point in the last five hundred years, including last years single Honey in the Rock, and a brand new track which the band spent the previous day recording. It was beautiful. And while it could be argued that it was a short set, nobody in the room could have felt short changed with such great night. 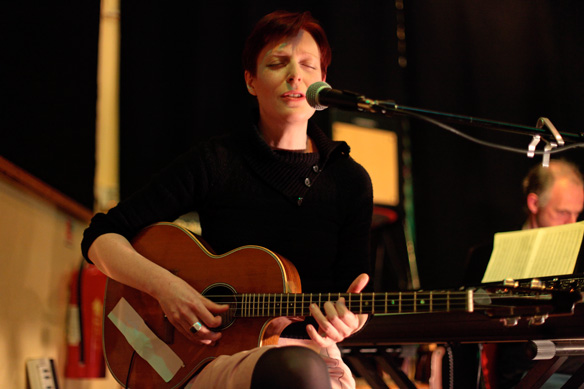 The phenomenon of playing a whole album live from start to finish isn’t a new one. Things really kicked off when All Tomorrow’s Parties introduced their Don’t Look Back series in the noughties, and the world and his wife have joined in, including Electric Soft Parade who got back together last year to celebrate the tenth anniversary of the release of their debut Holes in the Wall. Thomas White obviously enjoyed the experience because over the next few months he’s revisiting his back catalogue, starting last night with his 2008 solo debut I Dream of Black. 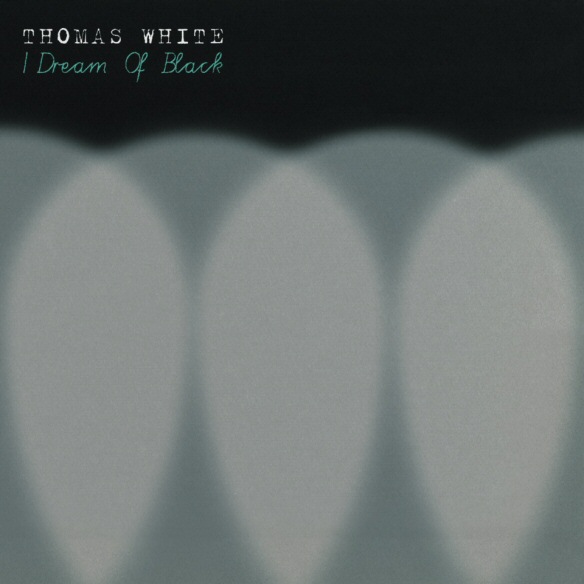 Support came from Red River Dialect, who launched their Americana / Country tinged debut album at the Prince Albert this Monday, and from local folk legend Mary Hampton, who would have been worth the ticket price on her own.

Thomas White and his band came out in their now trademark African gowns and played the album in full as billed, in the dark save for a b-movie* projection onto the wall behind them. There were some familiar faces in the band : his brother Alex on keyboards as well as assorted other people he’s played with in many of his other collaborations. Thomas explained towards the end that he writes his albums to be listened to as a whole, despite seeming a little embarrassed by some of the proggy instrumental interludes, which he attributes to the album being made when he was very stoned. It works as a whole too, thanks to the fact the record takes in a wide variety of styles and has stood the test of time. The band had learned the album and nothing more, so for an encore we just got the one song – a replay of one of the more upbeat tracks. 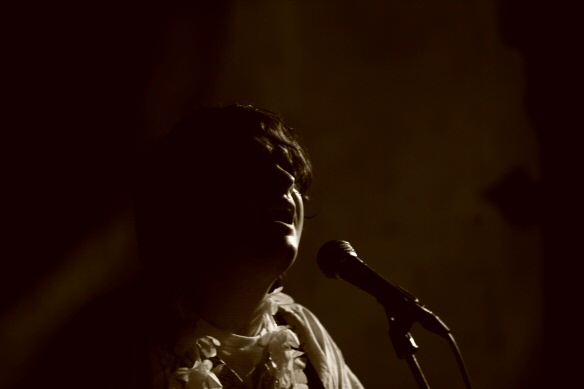 Thomas White is back on 9th August playing his second album The Maximalist, and again on 22nd September playing his most recent release Yalla.

*knowing my luck, it’ll turn out that it’s a really famous film that I should have spotted

I missed the opening act unfortunately, the early start being challenged by the grumble in my stomach, but got there in time to hear Danny Kendall singing his heart out. Danny was formerly of legendary Brighton band La Frange.

La Frange always wore their francophilism on their stripey t-shirt’s sleeves. Danny was followed by a visitor from the real France, Polyanna (not the Aussie rock band!) who was playing solo, stopping off at the BHC as part of a small UK tour. Isabelle Cassier (for it is she) has a beautiful voice and sings her songs in English, songs about old rockers and working in a factory and other things and was generally lovely. 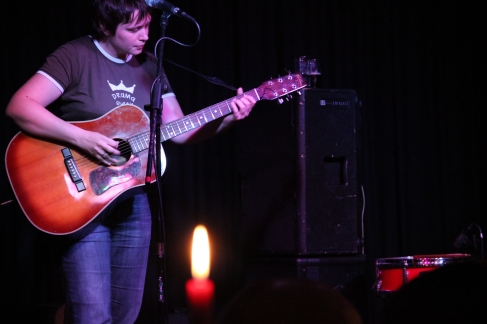 Next up was local legend and (as one music magazine recently put it) “national treasure” Mary Hampton. If you haven’t had the pleasure of seeing Mary play live, then you’ve been seriously missing out. This time, she had just a short set of three songs, one of which was a long acapella folk story song and the last of which the gorgeous Honey in the Rock from her beautiful album Folly was worth the entry price alone. One day I live in hope of Mary playing a two hour Springsteen-length set, but for now anything will do. 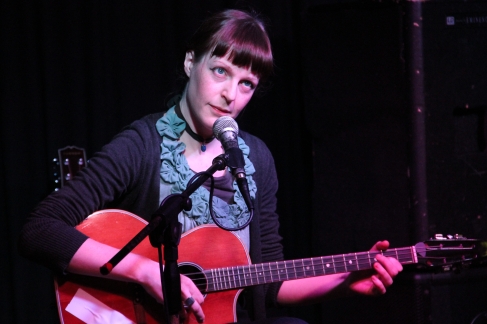 Penultimate act was the Celloist-singer (and former guitarist in James and Sharkboy…) Adrian Oxaal who played the BHC only recently but made a welcome return. His two John Martyn covers were spellbinding, the combination of Adrian’s deep hesitant vocal and his melancholic cello combining beautifully. He also played two of his own songs which were also fine moving numbers. Rarely seen live these days, it’s marvellous that the BHC provides opportunities like these. 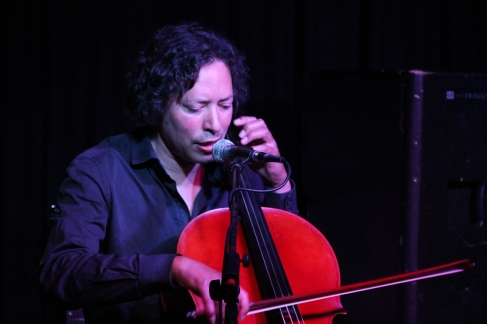 Finally, the headliners Junior Electronics came on stage and gave me a WTF moment, as strange electronic rhythms started nervously blurting out from a Moog synthesiser. Not what we have come to expect from our Bleeding Hearts. But gradually the songs started to take shape and the sound settled down into an interesting shape, and this listener began to ‘get it’. The final song was a joy, sounding as much like 60s sunshine pop as murky space-rock.

Junior Electronics are the brainchild of Joe Watson, his solo project when not playing keyboards for Stereolab and featured Mary Hampton again (playing a brightly coloured toy electric piano and occasional vocals). They have two albums out which are worth checking if you like post-rock electro-pop. 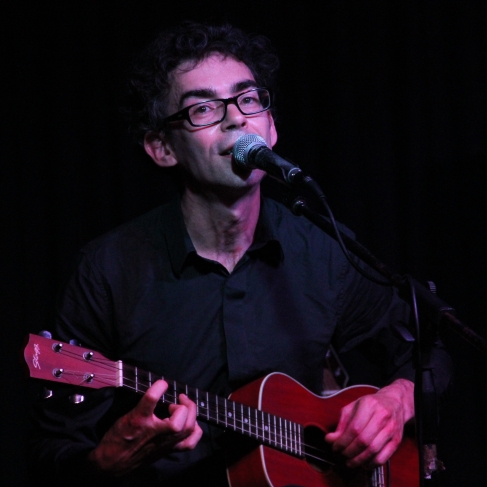 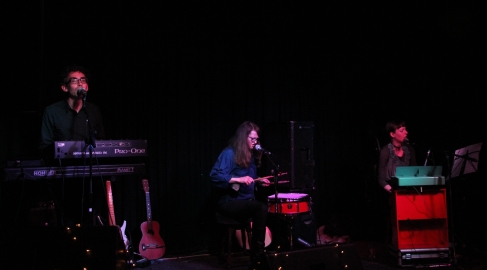 Congratulations to Brighton’s Mary Hampton, whose album Folly was voted 7th best of the year in the Folk Roots end of year critics poll! A special mention too to The Oysterband – who aren’t normally associated with Brighton but whose drummer Dil Davies lives in Hanover – their album with June Tabor, Ragged Kingdom, was voted top. You can read the full results of their critic’s poll here. We’ll be casting our eyes over other year end polls looking for other Brighton acts who have done well this year. I wouldn’t be surprised to see the Metronomy album cropping up here or there.

In the meantime, back to Mary Hampton. Here’s a video of one of the tracks from Folly; this is Honey in the Rock: