Robin Coward and his band yourgardenday launched their new EP ‘flat stream’ at St Andrew’s Church on Friday night. They were ably supported by an array of extrordinary Brighton talent in the form of Sophie Reid, Zoe Hazel and Bella Kardasis.

Brighton Music Blog was there to witness a celebration of new local music.

All photographs are by Jon Southcoasting.

The Gnomes are about

Robin Coward, our host for the evening

The band play on

The Source New Music Night is the regular monthyl gig co-sponsored by Brighton Source magazine and the Dome and which features an array of excellent new local bands at a bargain entry price. Last month was psych night, and this month the event had a totally different atmosphere with tables and chairs and candlelight. It was a cool vibe, and the four acts were each different and superb.

First up was Bella Kardasis, an act we’d never come across before but who was quietly impressive, playing some stunning atmospheric guitar tunes, with a variety of finger-picking, strumming and string-tapping style and an engaging in-between song story-telling banter. 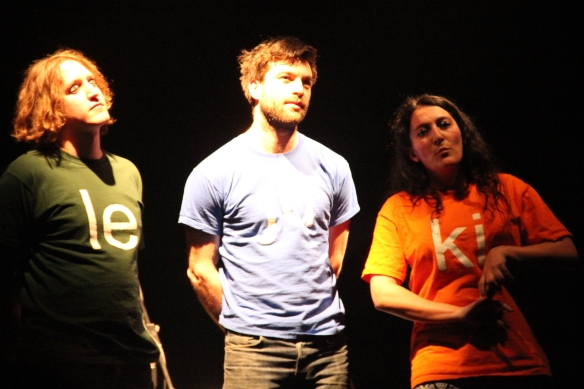 After the break we had a solo set from Danny Green, without the rest of his band Laish. Laish are currently launching their excellent new album ‘Obituaries’ which has been garnering 4-star reviews from all and sundry. Danny opened with the brilliant song ‘Warm the Wind’ from the new album, and then played another, but the remainder of his set comprised  new songs which have not yet been recorded. It’s a sign of how excellent Dan’s song-writing is, that these too sounded like long-time classics. Dan’s voice has a lovely authentic northern warmth and his lyrics are down-to-earth yet beautifully uplifting. Tonight he was on-fire with a gorgeous guitar sound that was well above the standard sing-songwriter. Laish are one of the finest bands around in Brighton and well-worth checking out.

We interviewed Danny recently and you can read his insightful thoughts on songwriting and music-making here.

Headliners tonight were another Source favourite Jennifer Left, the band fronted by northern chanteuse Jennifer Dalby. Starting out a little nervously for their first song, Jenn then decided to kick her shoes off and from then on the band came alive and played a set of cabaret-infused pop-folk full of great songs, including their singles Black Dog and Diggory, and their stunning interpretation of New Order’s Temptation.

So, four bands for four pounds and another great night of inspiring local music.

Next month we’ll be into a noisier selection of bands, and I doubt there will be candles. But it will no doubt be great all the same. Check their facebook page for more info.

Words and photographs by Jon Southcoasting