Our first proper blog post of 2012 was about Fujiya & Miyagi. They had recorded a version of Your Silent Face for a cd of New Order covers given out with the February edition of Mojo magazine. While it might look like we’re spending all our time writing about Brighton music, secretly we’re huge New Order fans on the side, so the chance to slip some New Order into the blog was most welcome.

In February we spotted Matt Hainsby swapping his bass for an acoustic guitar onstage at the Bleeding Hearts Club under the name I Am Ampersand. He was the third member to join the band and “Fujiya” and “Miyagi” had already been grabbed, so he was left with the “&”. A few weeks later the ultra-limited but utterly brilliant 20 Seas 4 Oceans 7″ came out on the legendary Great Pop Supplement label. It came with a hand-made wood print. It’s got lyrics about a mer-man. The intro sounds a bit like an unplugged version of Spirit In The Sky. What more could you possibly want? Another great 7″ followed in the summer and a few weeks ago he rounded off the year with Grave Goods, an album of quirky psychedelic folk songs that you wouldn’t have expected from a member of Fujiya & Miyagi a year ago.

Matt Hainsby isn’t the only member of Fujiya & Miyagi who’s been involved with extra-curricular activities this year. David Best has teamed up with Sammy Rubin from Project Jenny Project Jan to form Omega Male, who also put out their album in November. Where Grave Goods wasn’t immediately recognisable as an album put out by a member of Fujiya & Miyagi, there’s no mistaking Best’s inescapable vocal style on Omega Male. Tucked at the end of the album was one of our favourite tracks this year – the incredibly gorgeous Buildings Like Symphonies, which combined with I Am Ampersand’s 20 Seas 4 Oceans, was the clincher for placing them so high in our list.

Oui Love is a platform for French bands to get more exposure in the UK. What are we doing bringing them up on a blog all about bands from Brighton, I hear you ask? We’ll get to that later…

Oui Love started a few years ago, and as well as bringing bands to tour the UK, it’s also brought them over to festivals, becoming a regular feature at The Great Escape. Last night, with Melting Vinyl, four bands played under the Oui Love banner – three French and one linked to Brighton (see – I can write about the night here!).

I arrived as Yan Wagner was onstage, playing lush electro. The synths said New Order, but the vocals were more brooding. Next up, Jupiter took to the stage. The three piece had a great pop sensibility, with coquettish female vocals over songs which drew from the great French House tradition. Definitely ones to watch, for sure. Headliners Juveniles struggled for a while with some kind of short circuit which pulled the power on their equipment after a couple of bars, and the time taken to fix it ate into their set meaning they only got to play a few songs. What they did play was fantastic though. Loud exuberant live house, with clattering drums and rich bubbling synths. If only they could have played for longer.

That’s enough about French bands though. This is Brighton Music Blog after all. The reason we went along to the evening was to see the evening’s third act – Omega Male, who released their debut album last week. Half of Omega Male is David Best from Brighton’s Fujiya & Miyagi. When I found out that David Best was working with Omega Male and that Matt Hainsby was working on his own I Am Ampersand project, I feared that maybe we wouldn’t hear from Fujiya & Miyagi again, but seeing the rest of the band in the audience has put those ideas to rest. Omega Male’s live setup has Best on vocals and guitars, and Project Jenny Project Jan’s Sammy Rubin on keyboards and backing vocals. I sensed a certain nervousness – maybe it was because it’s one of the band’s first ever gigs, maybe it was the home crowd, or maybe it was because he didn’t have the safety of the band that he’s been playing with for over ten years – but there was no talking inbetween songs, and many were performed with eyes closed. The set followed a different arc from the album – where the record closes with the serene beauty of Buildings Like Symphonies, this was thrown in quite early into the set which built up to bigger, more up tempo songs later on, which made sense for what was predominantly an evening of dance music. Live, they don’t match up to Fujiya & Miyagi just yet, but I have no doubt they can achieve it in time – All they need is a bit more stage presence, and maybe a huge closing track they can jam out to, like Best’s other band have with Electro Karaoke.

The Oui Love winter tour heads to The Shacklewell Arms in London tonight, and then onto the Soup Kitchen in Manchester on Thursday. Omega Male only performed at the Brighton leg of the tour.

It’s been nearly two years since the last Fujiya & Miyagi album Ventriloquizzing came out, so we’re about due another one. As it happens, we’ve got two. Or maybe none. Confused yet?

The next couple of weeks sees the release of Grave Goods by I Am Ampersand and the eponymously titled Omega Male. I Am Ampersand is the solo project by Matt Hainsby, Fujiya & Miyagi’s bass player and Ampersand. Omega Male is a collaboration between David Best and Project Jenny Project Jan’s Sammy Rubin. 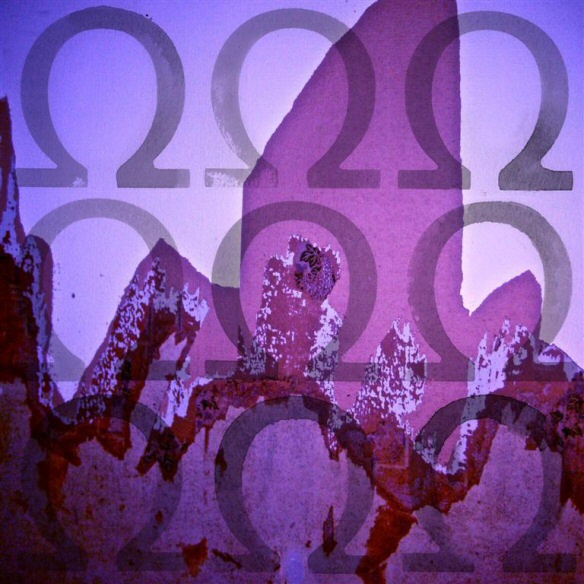 Both albums start off sounding like they could be Fujiya & Miyagi’s own work. Omega Male, the opening track of the Omega Male album Omega Male (sorry, I couldn’t resist) reuses a technique David Best used on Ankle Injuries, repeatedly slipping in parts of the band name into the lyrics. The vocal style is unmistakeable and the track sounds like Fujiya and Miyagi with a heavy dose of electronics. I am Ampersand’s opener Lights and Radios also showcases Matt Hainsby’s contribution to Fujiya & Miyagi, with a bit rolling bassline and fizzing analogue electronics at the end. After the openers, the albums take on their own distinct personalities.

There are several options for you if you’re in a band but you want to pursue a side project – you could take what you do in the band and see how that works with other musicians, or you could use the opportunity of being free from the band’s style to do something rather different, and the two albums here show both those choices.

Fujiya & Miyagi and Project Jenny Project Jan have collaborated in the past, touring together and making the track Pins & Needles which appeared on  Project Jenny Project Jan’s Colors EP back in 2009, so it’s no great surprise to see David Best working with Sammy Rubin again. David Best’s trademark vocals, emphasising each syllable (there’s a track about saying sorry called Uh-Pol-Uh-Jet-Ik), make the album sound very familiar to those who know Fujiya & Miyagi, and work well combined with Sammy Rubin’s electronica. It’s not a dance album though – You Bore Me To Tears revels in Serge Gainsbourg’s long shadow, and the album’s closing track. Buildings Like Symphonies, is probably the most beautiful song I’ve heard this year. An 8-bit electronic melody opens things sounding like digital birdsong. A simple string line starts at the same time as Best’s hopeful lament. Over a verse or two, the strings build, joined by subtle horns. Halfway through a loose drumbeat kicks off, the strings are soaring, and you truly believe Best when he sings that “Rumours were circulating / that we could build / Buildings Like Symphonies”. It’s the magical chemistry that makes tracks like Unfinished Sympathy by Massive Attack or Gorecki by Lamb the classics that they are. Breathtaking.

I Am Ampersand also has another of my favourite tracks of the year on it – 20 Seas 4 Oceans has received heavy rotation in these parts since it received an ultra limited release on 7″ earlier this year. I was enjoying it for the music, sounding a little bit like an acoustic country-folk take on Spirit In The Sky, not paying nearly enough attention to the lyrics which, now I’ve read the press blurb, I can hear are all about the song’s narrator being a Merman living in a city wanting to return to the sea. Obviously. The rest of Grave Goods is lovely pastoral psychedelic folk-pop, at times sounding like some of Gruff Rhys’ quieter moments, never losing it’s edge and lapsing into something “nice”. Fujiya & Miyagi loom large on Eko, an uptempo instrumental midway through the album, and then it’s back to the wonky pop on the first proper single Holding The Negative Up To The Light. The album closes with the title track Grave Goods – the archaelogical term for possessions buried with bodies. Three and a half minutes of country twang ruminating on life and death, and everything you accumulate inbeween. A fitting close.

Omega Male by Omega Male is released on Full Time Hobby on 12th November, and play at the Blind Tiger on Tuesday 20th November as part of Melting Vinyl’s Oui Love night.

Grave Goods by I Am Ampersand is released on Great Pop Supplement on 19th November.

Before we head out to the Dome Studio bar for the Oxjam Brighton Takeover tonight, here’s a few bits and pieces for you to listen to and watch.

We mentioned Al Chamberlain’s Train Song in our review of september’s Bleeding Hearts Club, and since then it’s turned up as a free download on Soundcloud. Go and grab it now – it’s one of my favourite tracks of the year.

Next is a new video by Omega Male, half of whom is Fujiya & Miyagi’s David Best. Take a look at Testosterone here:

Then we have Ital Tek with the eponymous title track from their new album Nebula Dance, which comes out tomorrow:

Finally, we have beautiful, trippy video Ayla by the Maccabees