Last weekend was Mutations Festival. We were only there for one day as a punter, and we only caught one local act, but here are our photos of them. Lime Garden are one of our favourite bands right now (check out their new single Clockwork), and we look forward to what they come up with next. Click through to view large 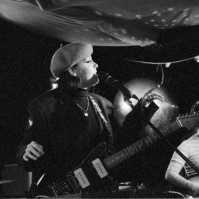 Last night Clowwns played at the Hope & Ruin (supported by Mum Dad and the Kids, but we got there a bit late for them because Clowwns played a two sets). The band, who disppeared off the scene for a few years are back for 2020, and played a mix of old and new songs, all as tight and angular as they ever were. Lighting was provided by the seemingly omnipresent Innerstrings (who’s also going to be hard at work next weekend running Lewes Psych Fest, alongside last night’s promoter Melting Vinyl). Click through the pics to view large: END_OF_DOCUMENT_TOKEN_TO_BE_REPLACED

Last night Orchards headlined the Hope & Ruin, playing their first sold out headline show of their careers to date. The gig was in aid of Brighton Women’s Centre, so selling out is the best thing that could have happened for both the band and the charity involved. Support came from Libra Libra (who we saw) and Pollon (who we sadly missed). END_OF_DOCUMENT_TOKEN_TO_BE_REPLACED