We don’t do gig previews that much any more, mainly because we don’t get out nearly as much as we used to. We’ve got a big feature coming, but it’s taking a little while to get together, so to tide you over until then, here’s a few gigs that have caught our eye over the coming month:

Tomorrow night (Monday 10th July), Bleeding Hearts almost celebrate their fifteen birthday at The Rialto. As they put it: “We’d planned to host an alldayer only to find out that our adversaries had used their telemeters to evil effect. Due to dimentional complications we will not be celebrating the actual anniversary but instead our inability to celebrate our longeveness.”. On the bill are Garden Centre, Academy of the Sun, Gary Goodman and Sam Cutting. 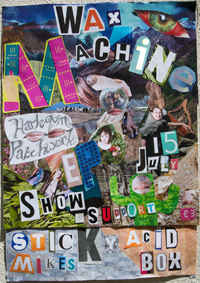 Next Saturday (15th July) Wax Machine launch their new EP Harlequin’s Patchwork at Sticky Mike’s. There’ll be visuals by the brilliant Innerstrings, and support comes from ZOFFF and Jouis.

On Saturday 22nd July, Britpop stars Sleeper return to play a sold out gig at The Haunt – their first gig in almost twenty years. Support comes from fellow nineties stars My Life Story.

The Fiction Aisle headline an intimate gig at the Komedia Studio bar on Thursday 27th July. Their debut album Heart Map Rubric has recently re-released on vinyl by Brighton’s Finest, so expect some of that in their set. Support comes from the off-beat genius of Crayola Lectern.

The following night (Friday 28th July), Animal House are top of the bill at The Hope & Ruin, to celebrate the launch of their Hot Bodies EP. Further down the bill are The New Faith, who’ve just finished recording their debut album.