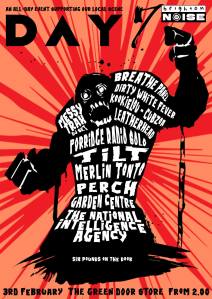 So, that’s January pretty much done with, which means it’s time for our February gig roundup. First up is an all dayer at the Green Door Store this Saturday from our friends over at Brighton Noise. Thanks to the Facebook event saying “in no particular order” we can’t quite work out who’s headlining out of Dirty White Fever, Breathe Panel, Garden Centre, Penelope Isles (playing songs from their individual solo projects), Leatherhead, Tilt, Merlin Tonto, Perch and the National Intelligence Agency, but we trust their judgement and it’ll be great whatever you get to see.

The big gig for us this month is the Go! Team, who have had the venue upgraded for the hometown show of their tour to the Concorde 2 (so please don’t go to the Haunt!). They’re supported on 11th February by Neon Saints Brass Band (who are also on their great new album) and Berlin’s Gurr.

The following night (Monday 12th February) promoters Hot Wax and Tigmus to put on this months Locals night at the Prince Albert. This time round that’ve got Hanya, Circe, Tuval and Olivia May Green on the bill. Then on Wednesday 14th why not take your valentine to Rixson Music’s Support Your Local Girl Gang night at Sticky Mike’s where CLT DRP are headlining.

As well the Go! Team, another of one of Brighton’s heavy hitting bands are playing – If you’re lucky you will have got yourself a ticket to see British Sea Power play at the Concorde 2 on 20th. Unsurprsingly, It’s sold out.

The next Spectrum takes place on 22nd February at the Basement and is a QM records special. Playing live are Lebeaux, Hush and The Isle of CC.

Finally, our last recommendation is the Strange Cages single launch on February 23rd, where they’re playing CBGBs night at the Green Door Store to celebrate the launch of their next release Hypothalamus Blues, with support from Guru and a DJ set from Wytches.