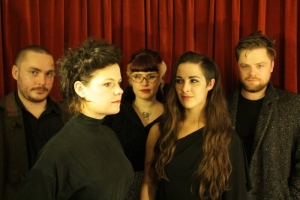 Gearing up for their third album Constellations due this spring, Moulettes are hitting the road for their first tour of 2014, playing at The Haunt on 24th April courtesy of Love Thy Neighbour. We were fans of the bands unique take on folk music for years before we even started the blog, and it’s always a joy to see them live. Their new album promises to be rather star studded, with contributions from members of the Unthanks and the Mystery Jets, as well as Herbie Flowers (famous for the legendary bassline on Walk on the Wild Side, as well as playing on countless other records) and Arthur ‘God of Hellfire’ Brown who both live locally. Arthur Brown has joined the band many times on stage, and is also playing at the Haunt two nights later, so who knows what treats we have to expect.

There’s also more news from Love Thy Neighbour, this time from the record company side of their activities rather than their promotions. Us Baby Bear Bones, whose What Starts With a U Ends With an I came out on the label last summer, have been in the studio working on their new EP. Details are scant at the moment but a YouTube video of what they’ve been up to has been posted on their Facebook page: