Normally around this time of week we post up our recommendations for the forthcoming weekend’s gigs. This week we’ve picked out just one for your attention, which is also an album launch for a new compilation which features some great Brighton bands. 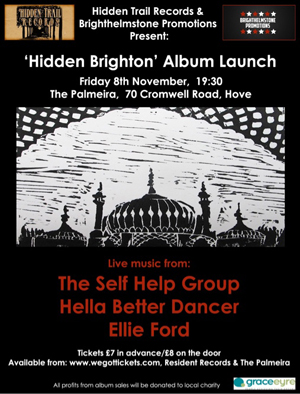 Hidden Brighton is a new compilation from our friends over at Hidden Trail – the label associated with the Some Of It Is True blog. It’s being launched with a gig on Friday Night at the Palmeira with three of the bands who contributed to the compilation playing live. The Self Help Group, Hella Better Dancer and Ellie Ford will be performing, and the album also features contributions from Kill Moon, The Raving Beauties, The Standard Lamps, The Hundredth Anniversary, tiNhearT, Flash Bang Band, Woodland Blue, Kokopelli and Us Baby Bear Bones. Proceeds from the album will go towards charity Grace Eyre, who support local children with learning difficulties, and all acts have donated their tracks free of charge. Tickets for the gig will be available on the door or in advance from the venue or Resident Records.