Now that we’re done with the madness of May, things are getting back to normal in the world of Brighton gigs.

Tigercub headline the Green Door Store on Thursday night, with support from Semper Teens, Animal Language and the Flash Gordons. Tickets are four pounds. Staying in the part of town, Ellekaye play at the North Laine pub.

There are loads of great gigs on Friday night. Kovak top the bill at the Hope alongside Storms and Cat Fire Radio, and The Self Help Group are on at the Brunswick with Eliza Jaye, The Beautiful Word and Bella McKendree. Friday Night also sees some of Brighton’s regular nights with strong line ups – Late Night Lingerie at Sticky Mikes is headlined by Skirts with The Repeat Prescriptions also on the line up, and it’s also Les Enfants Terribles at the Blind Tiger, with Written in Waters, Spit Shake Sisters, Calico and Glossy Coat. 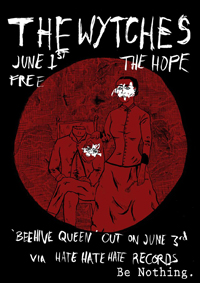 Saturday is Kemptown Carnival. There are loads of bands on the bill, including Derriere, The Kalakuta Millionaires and Carnival Collective. The afterparty is at the Blind Tiger from 8pm and is headlined by Transformer. Up at the Hope, The Wytches are having their single launch party, and it’s free!