After yesterday’s snow debacle, I had no trouble getting to the Prince Albert for tonight’s One Inch Badge vs Love Thy Neighbour Sea Monsters night. It was the night I’ve been most looking to based on the bands who were playing, but that’s not to say that I’m not looking forward to the other nights to introduce me to new bands.

First up was Jacko Hooper, a singer songwriter type, one man and his guitar. He had a great voice and at times, his guitar playing was stunning. His blurb cited Jeff Buckley as an influence but I was hearing more Jose Gonzales – a great voice with nice acoustic flourishes. My only concern was the his hoody was worn in the same way as Rylan from X-factor.

The second band on the bill were Plasticine. When they were setting up, I saw four boys in skinny jeans preparing their instruments, which is a bit of a pet hate of mine. Thankfully Plasticine were much better than my first impressions, and were very enjoyable to watch. However, their mini-biog says that they are carrying the Britpop baton, but my memories of Britpop have more singalong choruses. 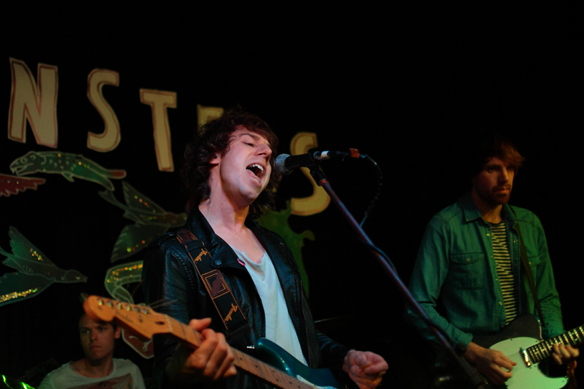 Holy Vessels were up next and played a great set of breezy country-folk, which drew heavily from last year’s Last Orders at the Marshall Arms album. It was their bassist’s last gig with the band, and a big chunk of the audience had come specifically to see Holy Vessels (including a number of people who stood right at the front and spent most of the gig taking photos on tablet phones). In a parallel universe, there’s a twin sibling of Holy Vessels where the lead singer hams up the “holy” part of their name and dresses as a gospel preacher and exalts the audience to join them in their journey. In our universe however, the lead singer keeps his eyes closed while singing and is more than polite between songs.

The big draw tonight was Abi Wade, who’s come a long way since we first saw her playing the acoustic slot at a Source New Music Night back in 2011. Easily the most obvious choice for the headline slot (despite her modesty), Abi engaged with the audience, who were awestruck by her talent, not just in her original cello-as-percussion-and-instrument setup, but also in her new set ups, introducing samples and programmed drums into the mix, or switching to piano. I’ve said it before and no doubt I’ll say it again, Abi Wade really is one of the most engaging performers Brighton has, and you really should go and see her live.