Last night, Catherine Ireton played her biggest Brighton gig to date. Over the summer she’s been playing the most intimate gigs, at the Booth Museum, in a room tucked around the back of London Road station and most recently, as she put it last night “in your bedroom” (which is a nice way of saying it was a webcast). Before she plays her last Treasure Tracks gig in a couple of weeks time, she’s played a night at the Green Door Store, supported by Hattie Cooke and Ed Prosek. 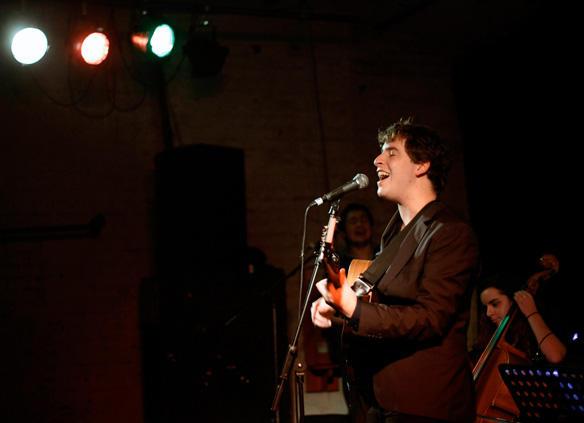 We managed to miss Hattie Cooke due to a prior engagement at the Basketmakers, and arrived just in time for Ed Prosek and his band. Ed is an American who’s made Brighton his home and plies his musical trade in Singer-Songwriter stock. He made a bit of a splash this summer when his cover of Paul Simon’s Homeward Bound got used in an advert for cheese. Aside from the great voice and well crafted songs, Ed’s great strength last night was the lush instrumentation – As well as Ed’s guitar playing we was joined by a mandolin, piano and full string quartet. My only grumble was his song moaning about the south coast of England in favour of California. Ed – be mindful of your audience!

Around half nine, Catherine Ireton took to the stage. Much like her Treasure Tracks gigs, the bulk of her set was just her and her piano – a simple setup, which didn’t need anything else. The songs got carried along by Catherine’s big voice, telling stories based on recollections of her experiences, of haunted rooms and half-remembered childhood memories. For the closing track of her set, she called on the supports to join her on stage for a rendition of the Stuart Mudoch penned Come Monday Night, recorded by Catherine when she  part of the Belle & Sebastian side project God Help The Girl. If that made the gig feel very much like a family affair, then the encore made things feel even more intimate – Catherine had been singing with a radio mic, and for her finale wandered out into the crowd and sung unaccompanied. Breathtaking.