When I was reading an obituary of jazz legend Dave Brubeck last week, it noted that one of the reasons for his popularity in the 1960s was that he toured college campuses and made sure he reached out to a younger audience. So it was good to see a younger audience in the Komedia for last night’s gig. Sure there was a section of the audience who weren’t so young, dressed in black and looking like they wanted to be smoking gitanes, but on the whole it was a crowd of people who weren’t living out the cliché of the Fast Show Jazz Club.

One of the reasons was support band (who were who we’d come to see). Physics House Band have already scored themselves a Brighton Source Cover, and are headlining a night at Sea Monsters next month. They’ve been working incredibly hard this year, playing regular gigs (including a slot at Lewes Psychedelic Festival), building their fanbase and writing new songs (some of which were played last night). As their confidence and abilities have grown, they’ve transformed from three guys furiously concentrating on their instruments to a band who are more comfortable onstage and who interact with their audience a bit more. Jazz-prog-math-rock fans have never had it so good. 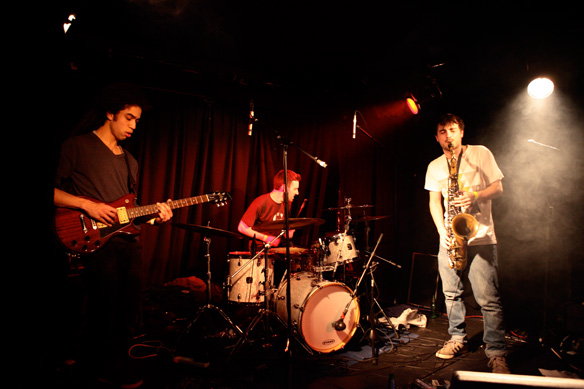 Another reason for the younger audience was probably Roller Trio’s Mercury Music Prize nomination. Following the awards ceremony, sales of their album went up by a mammoth 618% according to the Guardian (compared to a rise of 7-9% for our local nominees The Maccabees). It might have been easy to dismiss the band as this year’s token Jazz entry, but Roller Trio were a joy to behold and it was easy to see on the basis of last night’s show, that the nomination wasn’t a token entry at all. Their individual performances were impressive, but more impressive was the way that they all melded together. It wasn’t all just about technical ability though – musically the evening was a triumph too. At two ends of the spectrum, jazz can either end up as coffee table music or as avant garde unlistenable noise. Roller Trio skilfully avoided these two extremes but played a set which at times challenged though never pushed things too far.