Three weeks in a row. This IS now a regular feature! Except in a couple of weeks it’s Christmas, and it could all go to ruin, but we’ll do our best. 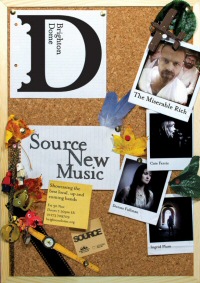 Our pick for Friday night is the Source New Music night at the Dome Studio Theatre (which you might still be calling the Pavilion Theatre). We’re a fan of the regular monthly night at the best of times, but this month’s is a bit special, being the Miserable Rich‘s last gig before they take a sabbatical. The night also has Cate Ferris, Donna Fullman, and Ingrid Plum. (It’s also a big night for non Brighton Musicians, with Beth Orton, Rodriguez, and Father John Misty playing around town. Happy Mondays and 808 State were also meant to be playing but that’s been put off until June next year) 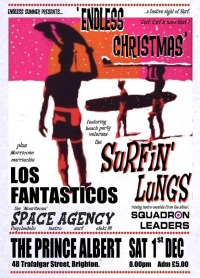 Our choice for Saturday is a night called Endless Christmas at the Prince Albert – Saturday is the first of December, so we’ll let them get away with using Christmas so early. The night’s headlined by Surfin’ Lungs who are supported by local acts Los Fantasticos, Space Agency and Squadron Leaders. There’s not enough Surf Rock in Brighton, so it’s good to see this happening. This saturday is also the House of Hats next Harvest Sessions at the Brunswick, which comes highly recommended. Support comes from Conrad Vingoe and Kat Rose.