Calling your event Faulty is tempting fate really, especially where there’s home made electronics involved. Due to a run of bad luck that not even a trip to London for replacement parts could help, it came to pass that the “interactive” element of last night’s Brighton Digital Festival event wasn’t working. Apparently all was well at last weekend’s Makers Faire, but since then things haven’t been right.

Three Brighton acts were on the bill : Krill & Captain Kelp, Maf the ROM and Lumo. 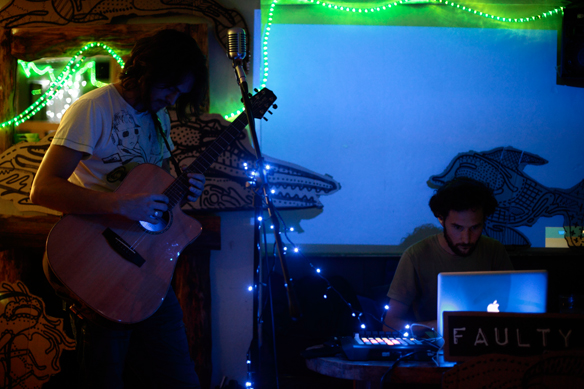 Last time we saw Krill, he was acting solo, hiding behind a laptop at Brighton Electric. Now he’s got a partner in crime, in the shape of Captain Kelp. The music is still predominantly lush ambient electronica, but now live vocals, acoustic guitar and drums are added to the mix, and sampled and looped in real time, proving to the audience that they aren’t just checking their emails.

By his own admission, things got a bit stranger when Maff the ROM took to the stage. Maff operates on the very edge of music – not for him are the likes of melodies, or intros or fade outs. Tracks stop unexpectedly, and the sounds coming from the speakers was made up snatched samples from films, footsteps. It was a challenging set, but I reckon that’s just the way that Maff wanted it. 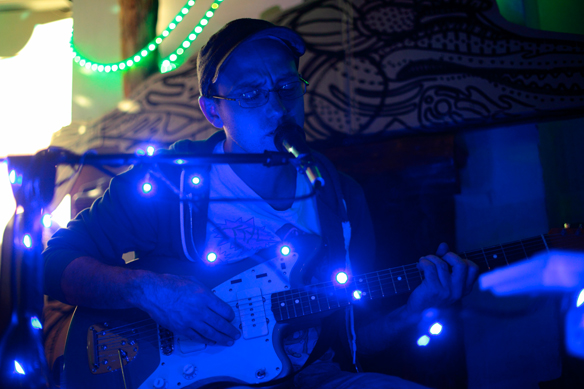 The last Brighton band on the bill was Richard Davis, who we’ve written about in glowing terms before on the blog about his Heliopause guise. Last night he was going under the name Lumo. The name of this years Heliopause album was The Lumo Tape and featured material originally written under his Lumo moniker before being beefed up to the full band setup. Tonight, using a heavily reverbed mic, an acoustic guitar and additional keyboards, Lumo plyed on layers on top of pre-programmed material. For each new Lumo experience, we’re told, new songs are written, which means that tonight’s performance was a little rough around the edges, but no less charming for it.