In another world, I’d be writing about Grasscuts tonight – their album came out today, and they played a free instore at Resident to celebrate it’s release. However even though the sensible thing would have been to go to a gig in the dry, I was standing in a damp muddy field in Hove for another Brighton band.

Tonight, the Olympic Torch Relay reached Brighton, and the evening’s celebrations were held at Sussex County Cricket Ground. The highlight of the evening (except for the whole torch thing) was a short set by Rizzle Kicks. I was quite surprised that it was a full band setup, since they only played three songs – I was fully expecting it just to be a PA, which was their setup the only other time I’ve seen them – two years ago at the Great Escape before Down with the Trumpets was even released. 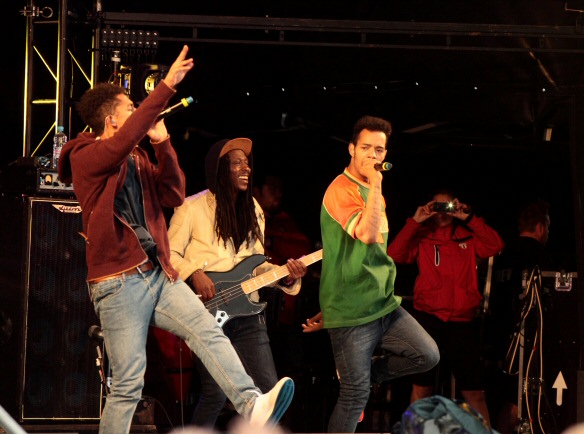 Jordan and Harley played When I was a Youngster, Mama Do The Hump and Down with the Trumpets – their greatest hits so far – and the crowd loved it. I reckon about 20% of the crowd didn’t even bother for the torch to arrive and and left after their set. We’re pretty lucky that there’s an act like Rizzle Kicks who can represent Brighton – I wonder what happened when the torch stopped for the night in Weymouth or Salisbury last week?