If a release has six tracks, three bands and clocks in at less than twenty minutes, does that make it an EP, or a mini-album? Who knows. Guts is a new digital / cassette release on new-ish label Reeks of Effort and is released today. 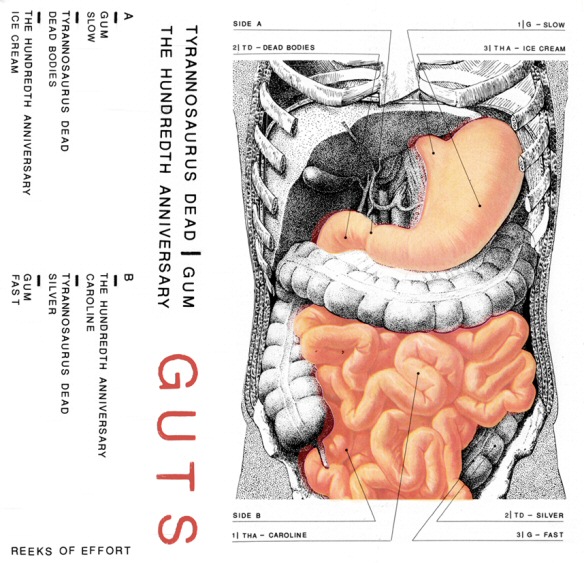 GUM open and close the album with the rather unimaginatively titled Slow and Fast. One track is slow fuzzy shoegaze, and the other is faster fuzzy shoegaze. I’ll let you figure out which is which.

Tyrannosaurus Dead contribute a new track and a remastered version of a track which has surfaced before. Dead Bodies is one of the tracks from the band’s recent sessions at a studio on boat, and clocks in at less than two minutes of lo fi indie. Silver first surfaced last year, but I know that the band were never happy with the sound . The new version is a bit less clean sounding and deliberately a bit rougher around the edges.

The Hundredth Anniversary have only played one gig in their short life so far, and have only put up one track for us to hear before the tracks on Guts. Ice cream is like a Tyrannosaurus Dead track from a parallel universe – the influences are all the same, but instead of male vocals and guitars, it’s a female vocal and piano. Caroline takes the band to the next level with a wider range of influences and instrumentation – Rich, ambitious and other worldly.

The mini-album (or is it an EP) is available for download at the label’s bandcamp page, and all three bands are having a launch party at the Green Door Store this Friday 6th July.

1 thought on “Guts / Tyrannosaurus Dead, The Hundredth Anniversary and GUM”