I say The Impellers, but actually, I’m just meeting up with one of them. The Impellers are a ten piece funk band, but I’ve popped down to The Basketmakers to catch up with main man Glenn Fallows (known onstage as Ed Meme), in advance of their new seven inch being released next Monday. 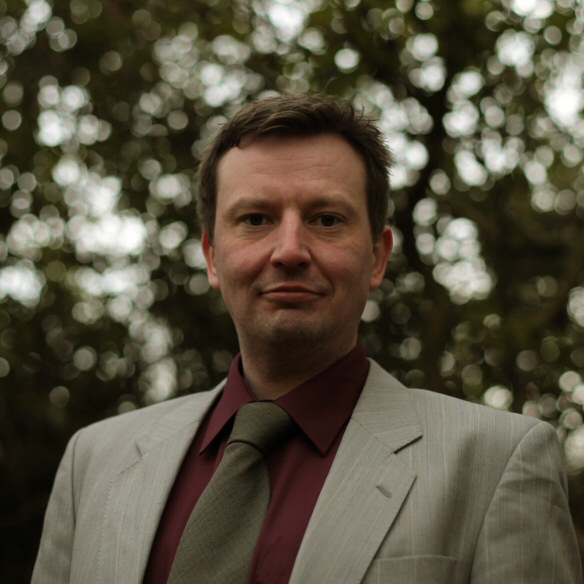 Glenn Fallows of The Impellers

GD: The Knock Knock. We supported James Taylor Quartet in 2010, there’s some stuff on YouTube from that show, and that was one of four or five tracks from that was uploaded. I think that was the first track I’d written after the first album came out, so it’s been around for quite a long time now, but it’s sort of evolved a bit more. The live version’s got all kind of extra added solos, and a bit of rock at the end, and we like to mess with the tempos at the end. The outro’s longer than the actual song itself. The 7″ is just three and a half minutes of dirty funk.

RO: And the b-side’s another indie cover version?

GF: Yeah, it’s I Predict A Riot, by the Kaiser Chiefs. There’s always an element of not becoming some kind of really, really sub-standard Mark Ronson doing them – we’ve been doing the That’s Not My Name thing for absolutely ages now as well. You don’t want to become someone who just does that. But when the label heard that, that was the one they wanted. Something to do with the snare sound – apparently it sounds like on old 45. It’s really, really fast, so I don’t know if it’s the setup, or the timing, but it was an incredibly hectic way to get the drums, so maybe that’s how we got that sound. It’s been picked up by various people, so yeah, we’ll see how it goes, but we’re pleased with it after all this time.

RO: The next gig is Friday 30th March at the Blind Tiger?

GF: It should be a good one. We’ve got two labels for the new album – The vinyl will be on Mocambo records as is the 7″ and the cds are being done by a different label, because Mocambo is a vinyl only label. So there’s a label called Legere records, who are putting out the cd. Mocambo records have a house band called the Mighty Mocambos and they’re going to be supporting Lee Fields in London and wanted to stop off somewhere on the way there, so they’re going to come here and do the show next Friday night on the way. So we’re on Mocambo, and so are the Grits, so we put together a showcase for the label – the Grits will go on, we’ll do a bit, and then the Mighty Mocambos will do their thing as a headline. Hopefully it’ll raise the profile of the label as well. It’s well known within the right circles – people who buy 7″s mainly – but it’ll be quite good to raise their profile as well, because they’re taking a real risk with us putting our album out as well.

RO: So when’s the album due?

GF: 27th April. At last! It’s nice to get it finished. It’s been hanging around for a while and we’ve eventually come up with something we’re happy with.

RO: Is that all done and ready to go now?

GF: I think the vinyl’s been made, actually manufactured now, so it’s all ready to be distributed, and the cds are being done, so it’s all there. It’s been interesting to sign up with a label who are really pro about the way that they’re doing things. They’re putting out a radio single, initially in Germany, and then across Europe – Italy, Spain, France – proper radio pluggers, which is something we’ve not really had before. No disrespect to Freestyle – independent label, not very well resourced – they just don’t have the bandwidth to do that sort of thing, and that’s fine, but Legere have coughed up some cash, got proper radio pluggers, chosen a song from the album which isn’t the one that’s coming out on 7″, a song called Politics Kills People, which is basically plugged for radio play all over Europe. It’ll be interesting to see what sort of impact that has for us and I suspect we might be spending a bit more time in Germany this summer than we would have done in any other summer of our lives! It’s mostly smaller gigs. We’re going out in May, and we’re doing Strasbourg, Stuttgart, and Frankfurt.

RO: Have you got a slimmed down band who go and do that?

GF: No – all ten of us are going. Mark, our trumpet player, is going to have a look at the van we’ve hired this weekend to see if it’ll get us all in. Hopefully we will be able to! 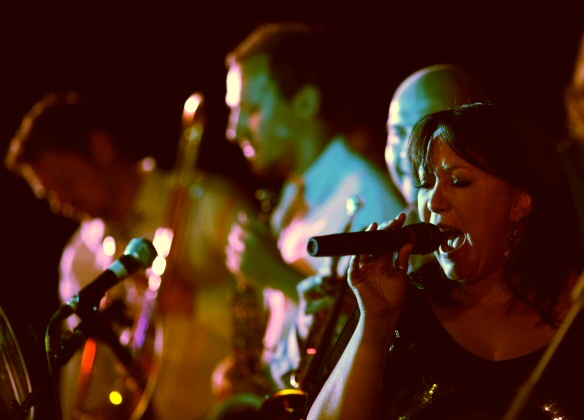 RO: Since the first album, you’ve also had a project called Ultimate Breaks and Beats. Tell us about that?

GF: It’s sort of something that we do a bit in out Impellers set now as well. It’s kind of a nice thing to be able to change up a set a bit, because the stuff on the new album we’ve been playing it live for quite a while, so to throw in some different bits of other stuff is nice. The Ultimate Breaks and Beats stuff is like a mix from start to finish – it’s an hour and a half and I think we stop just three times in that, so it’s all mixed as if like a DJ. We’re trying – because we’re going to go out and tour over the summer to promote the new album – to segue all the impellers stuff together in the same way as the Ultimate Breaks and Beats, but that gives us the opportunity to throw in some James Brown, and those old funk breaks and stuff like that and put it all into the Impellers set – 30 seconds of this track, a minute and a half of that track and then come back to a full Impellers track, and do it that way, so it gives us a bit more freedom to be able to mess with what we’re playing and change from gig to gig as well, not just do the same thing over and over again.

RO: Has doing that been part of what’s held up the Impellers album?

GF: yes! I think we were sort of getting there with the album, and then we were approached by Adrian Gibson who used to own Freestyle Records who put out our first album. What he was looking for was a band who could do what Breakestra do, but that weren’t as expensive to bring over from America! So he wanted us to do that and we did a couple of gigs with him and then took it on ourselves, and just do shows with that every so often. Although we are playing with Adrian Gibson in Soho on 17th April and he’s asked us to support ourselves, so we’re an hour of Ultimate Breaks and Beats, so one hour without stopping of real old classics, and then an hour and a bits worth of Impellers set as well. So we’re the support band and the headline band.

RO: I’ve seen a few tweets about an Ed Meme solo album. Is this tunes you wrote for the Impellers that Claire couldn’t write vocals for?

GF: I write the lyrics, thanks very much!

RO: OK, so were they instrumentals, or ones that that have got a different sound to the band?

GF: I should clarify what I just said – I don’t write *all* the lyrics. Claire wrote one song, and Barry wrote one too. I can’t take credit for all of it (or else Claire will have my balls!) . Basically, when I set up our band it was because I’d decided I quite like writing songs, after being a guitarist in other bands for a long time, and doing a lot of instrumental, and downtempo, and which didn’t go anywhere and to be frank, I wasn’t very good at. So I discovered that I was alright at writing these funky soul songs, so I got the band together to play those, but then you bring in people to the band, and they realise that actually if I can do it, they can probably do it as well, so everyone else in the band gets a little bit more creative and people want to write songs and people want to contribute, so the first Impellers album was more or less I wrote that, and that was what I put the band together for, and then after that point, the new album is probably 60% what I wrote. “Do What I Wanna Do” is a track that Barry wrote, and that’s a great song, there’s a track that Claire wrote, again, one of my favourites on the album, but then I’m “hang on, this is my band, leave it alone!”. So to cut a short story long, the reason I started the Ed Meme thing was that I had so many songs I wanted to write and so many things I wanted to do, I just thought “I can’t do that with the Impellers now”. There’s not enough room in the Impellers for me to put out whole albums any more, so I thought I’d do my own album. Also it gave me the opportunity to work with some different people, and experiment with some different styles of music.

GF: No. It’s not even a band as such. So the drummer is a guy called Mark Claydon who records with Giselle Smith and the Jezebelle sextet. He’s an amazing session player. But all the bass, all the keys, all the guitar is me, so it’s more of a studio project. I can’t sing, so I’ve had to get a lot of guest vocalists to do vocals. So there’s about 12 tracks four of which, maybe five are instrumental, so I got in a lot of other singers. Claire’s done a couple of tracks on it. I’ve got a guy called Miles who sings with Speedometer, a lady I met in France playing at one of our gigs called Michelle David, who’s got a proper soul voice, she does a ballad on it, a couple with my mate Eugene – one’s a dubby reggae thing, one’s a nu-soul thing. So it’s not a straight down the line funk album.

RO: Have you got a label for that?

GF: Yes, I have, but it would be foolish to say in any public forum as yet. Hopefully it should be out later this year. Once we’ve promoted the Impellers stuff, it’ll be out after that.

The Knock Knock by The Impellers is out on 7” on Monday 26th March on Mocambo Records. The Facebook event for the Blind Tiger gig is here