Every third Sunday of the month, Brighton Folk is held, at the Brunswick pub. It’s been running for a few years now and is a pretty established part of the Brighton music scene. Last night, two local acts were on the bill – The Galleons and Peanut Albinos. The evening started off, as ever, with Amy Hill playing a few of her own folk songs.

The Galleons reminded me a lot of Tunng – they were quite folky with occasional time signature changes, and the interplay between vocalists Ben and Beth hark at their sound too, sometimes harmonising and other times swapping melodies. Six people on stage was quite a squeeze, especially with the bassist swapping between conventional electric bass and a futuristic looking upright electric bass. Still, they managed a lot better than last time I saw them, when they were shoehorned into a tiny corner at the Constant Service in Hanover. With that bit more space, they managed a bigger sound, one which will hopefully be brought to life even more when their new album hits the shelves in a few weeks time 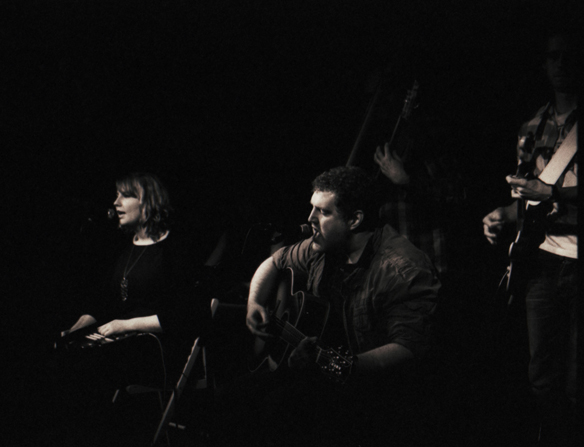 Peanut Albinos might have been playing in the side room at a pub in Hove, but when you closed your eyes, you might as well have been in a whiskey bar in America. Actually, if you ignored the rest of the pub and just looked at the stage, you could easily imagine the same. Sonically, it’s as if Tom Waits were fronting an stateside version of The Pogues. It’s music to get drunk, dance and sing along to. They brought their own crowd along, but they didn’t need to – even without them there, they would have raised the roof.

1 thought on “Brighton Folk in Hove”