It was the birthday of Porridge Radio’s Dana Margolis yesterday and she had a proper party at the Prince Albert in Brighton at a special matinee show in the afternoon. There were balloons, cake, party hats (obligatory for audience members) and everything.

There were also four hot bands playing some varied and extrordinary sets.

First off was R.Dyer, with some excellent intimate solo songs based around looping vocals, guitar and clarinet. The penultimate new one and the closer were particularly striking to these ears.

Next came Georgie from Porridge Radio in her SueP alter-ego, accompanied by a band – comprising double bassists and double keyboards. It was an unusual set up and an unusual set of danceable, pop-based songs in Georgie’s inimitable but engaging style.

Porridge Radio played an extrordinary set, as they inevitably do. It was a mix of new songs (LILAC? D.A.M.T.?), which have taken shape and foretell a great new album in the making, and older numbers like Bark Like A Dog (from the superb debut album ‘Rice, Pasta and other fillers‘) and their early classic Born Confused, again taking on new shapes and forms in an electric performance. A band not to be missed. 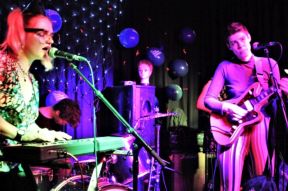 Words and photos taken in low light by Jon Southcoasting.