Sons Of Noel And Adrian ended their recent UK tour with a bang, back home at The Haunt in Brighton last Saturday.

First up from the Brighton-based label Willkommen Records, was Emma Gatrill, a familiar face to anyone who has heard her floating harmonies with SONAA. Managing to avoid too heavy a comparison with Joanna Newsom by eschewing medieval folk tendencies, Gatrill’s harp playing mixes with vocal effects and accompanying instrumentation to bring a contemporary sound to the instrument.

Next we were treated to Laish, who have just been picked to play at No Direction Home festival. Fronted by the enigmatic Daniel Green and featuring several players from the Willkommen collective, Laish provided an uplifting interlude with witty, knowing lyrics, danceable tunes and playful counterpoints between instruments. 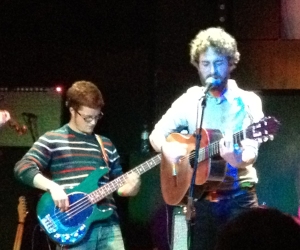 Headlining were Sons Of Noel And Adrian, who seem to have undergone yet another musical metamorphosis since their last gig in Brighton. Having already forayed into electric guitars they have now brought in synthesizers too, producing a great contrast during the set during which some of the band ditch their familiar acoustic instruments to play polyphonic melodies in a Tortoise style. The new tracks are layered and inventive, with the ever ambitious scope we expect from SONAA. The band clearly love playing these new songs together, and the audience were enraptured.